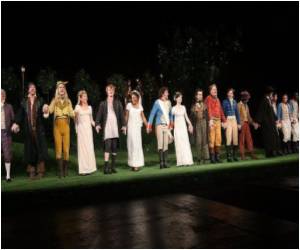 A Polish arts troupe cast inmates alongside professional actors in an effort to engage those on the sidelines of society for a Shakespeare play with a twist.

The six men, whose crimes range from theft to battery resulting in death, performed their adaptation of the bard's "A Midsummer Night's Dream" at Warsaw's posh Polish Theatre last weekend.

"We never thought it would really come to this," said Szymon Semeniuk, 33, who plays Demetrius and is serving a three-year term.


"Because us, thieves from jail, on stage? Really?" he said, citing initial concerns that other inmates and the public would make a laughing stock of them.
Advertisement
"But after the premiere, we grew a little taller, and we now feel pretty confident up there."

The men were bussed over from their high-security prison in the eastern town of Opole Lubelskie for the show, part of a programme between the jail and the Zapaleni.org arts troupe.

"I want people to see that these are normal guys who are able to do something and can be likeable. That they can give something of themselves, not just take," said Dariusz Jez, 47, the group's founder and a professional actor.

Jez speaks from experience: the former gangster with a pot belly and hearty laugh did time for fraud and other offences before changing his ways, in part thanks to his own stint in prison theatre.

Well aware of the healing power of the arts, he has plans to bring it to other marginalised groups, from homeless individuals to the elderly to people with AIDS.

His partner, director Joanna Lewicka, chose the Shakespeare comedy because she thought the experience would be like a dream for the men, an escape from the realities of life behind bars.

"In a place with individuals forgotten by God, it matters that not only are people not afraid to be around them but that they also want to collaborate," said Lukasz Pruchniak, who runs the prison's cultural programme.

Starting in June, several dozen inmates spent months on set design, rejigging the script and rehearsing lines with the help of theatre professionals.

Andrzej Fiuk, 46, locked up for extortion, did most of the script work, shortening the bard's text and adding a knowing subplot of inmates staging a play within a play as an escape ploy.

"Shakespeare is hard, so I really had to delve into the text to understand it, to cut the dialogue in a way that would hold water, right?" said Fiuk, whose translations of prison slang had the crowd roaring with laughter.

Before leaving for Warsaw, the men spoke with AFP in a cell reached via a maze of corridors and a dozen locked doors.

Asked about the play, they joked that they did it for "the fame, the money, the women".

But on a serious note: "The initial motive was to get out of the cell, to do something. And then, we actually got into it," Semeniuk said.

"And me personally, I'd like to be able to do my daughter proud. So that it's not just that Dad sat behind bars, but that look, it all worked out."

Adrian Gmiterczuk, nearing the end of a two-year-plus sentence for theft and battery, said he had only once been to the theatre before taking the stage himself.

"Before, I'd throw rocks at art. Now we take it seriously," said the 19-year-old who drew laughs for dressing as a damsel and breaking into falsetto for the role.

Originally intended as a one-off performance back in October, the show attracted such interest that the project continues, with another performance planned this month and a cabaret now in the pipeline.

The production required a leap of faith by officials.

"These were no angels," their jail division head Ludomir Minicki said from his smoke-filled office.

For the premiere, the prison sent a dozen fully-armed guards and kept the group handcuffed lest anyone try to flee.

But no one did and the prison gradually loosened the security measures: for the Warsaw show, only Pruchniak chaperoned the men, allowing them to step outside to smoke at their leisure.

Showing trust was crucial to the project, he said.

"If we were only thinking of security, we could have sent along 20 guards who were armed to the teeth -- but then we'd be missing the point."

In the final scene, Gmiterczuk, wearing a flowing white dress and wig, reads out a tongue-in-cheek list of prisoner demands, before addressing the crowd.

"And this last one isn't a demand at all, but a huge request: that upon our release from prison, you all view us the way you did today."

Self-Help Books Found Inferior to Shakespeare, Wordsworth as Therapy
A new study has found that reading works of great writers like Shakespeare and Wordsworth in ......