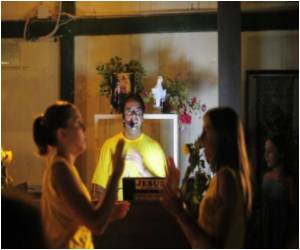 Praising the loan of a drawing by the Renaissance master to a school in a rough suburb of Naples, Michelangelo's art might help deter Italian youths from a life of crime, says the interior minister.

"To fight organised crime, police work is essential, but it is not enough: to win this battle, it is necessary to awaken the conscience," Interior Minister Anna Maria Cancellieri said.

"Works by great artists have the capacity to convey emotions, especially among the youngest," she added at a Rome news conference unveiling the initiative.


The red pencil drawing "Study for the Head of Leda", to be loaned to the school by the Casa Buonarroti foundation of Florence, will go on display from April 24 to June 2, organisers said.
Advertisement
Casavatore has in recent years seen an upsurge in mafia gang violence in a turf war over the drugs trade in the relatively poor southern city.

Naples authorities and two cultural organisations are behind the project to lend the sketch of the head of Leda -- a figure from Greek mythology who was raped by Zeus in the form of a swan -- to the school.

"This drawing is not only beautiful, it was drawn as Michelangelo was fighting for freedom and justice," said Casa Buonarroti director Pina Ragionieri.

Geppino Fiorenza, a spokesman for anti-mafia group Libera, said "beauty creates ethics, which are essential to fighting the mafia".

Top Labels Hope for Boost to Made in Italy
For Milan Fashion Week, Italy's top luxury brands take to the catwalks, as the industry waits ......