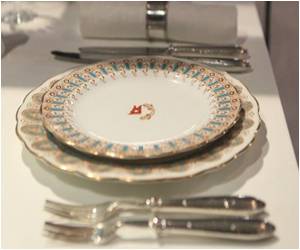 More than a 100 years after the Titanic sank, Titanic's overwhelmingly French menu has been re-created by Canadian chef of Goan origin Tony Fernandes in Toronto for a charity dinner Friday.

The seven course meal served at the Captain's table onboard the Titanic will be whipped up by Fernandes and his Golden Horseshoe Culinary team at the Algonquin Ballroom.

"The menu is rich and fatty - a classical French menu accompanied by fine wine and liquor. My favourite dish is the filet Mignon lili, which has foie gras, truffle and artichoke heart," Fernandes told IANS on the phone before he went about laying the table for the event.


The meal will begin with Canapes A L'Amiral as the meal's sole hors d'oeuvre, followed by a rather rich cream of barley soup. Fish follows next, with a poached salmon served with mousseline sauce and cucumbers and later by Fernandes' favourite filet Mignon Lili.
Advertisement
Then will follow palate cleanser in form of 'Punch rose' in order to give the taste buds a breather between the next French culinary onslaught that's called Chicken Lyonnaise, served with chateau potatoes, minted green pea timbales and turnip puree. And finally a Pavlova Mion, topped with melon and raspberries as dessert.

How long did the chef take to research and conjure up the meal?

"We spent hours poring over the authentic recipes and images of the food in order to adapt the dishes to portions our guests will enjoy today, while still maintaining the authenticity of the menu. The presentation is much different from what we see in restaurants today," he said.

What helped the master chef was the fact that his idol was a legendary French chef himself.

"I was trained in classic French cuisine and I idolized Chef Auguste Escoffier, who is known as the Godfather of Chefs. He was legendary during the time the Titanic set sail and he was instrumental in popularizing traditional French cuisine," explained Fernandees, who is an ethnic Goan. His family hails from from Thivim, in north Goa, but he was born and brought up in Mumbai, before he shifted continents.

"I thought it would be a fun way to raise funds for our Golden Horseshoe Culinary Team - by taking Crowne Plaza Toronto Airport dinner guests back in time to enjoy the dining experience once enjoyed on the RMS Titanic," he added.

"This event is a fundraising initiative for Southern Ontario's Golden Horse Shoe Culinary Team, of which I am team captain. All funds raised during The Captain's Table dinner will support our team's trip to the Culinary World Cup 2014 in Luxembourg, where we will represent Canada's culinary excellence. We require $80,000 to compete," he said.

New York Restaurant Revives Titanic Menu
A restaurant in New York is recreating the menu offered to first class passengers on the ill-fated ....