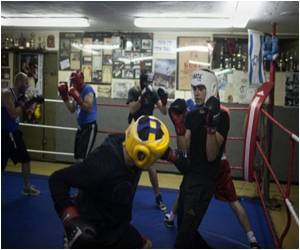 Newly published research from Cleveland Clinic recommends the use of padded headgear and gloves to reduce the impact that fighters absorb from hits to the head.

The research - published online today by the Journal of Neurosurgery - measured both linear impacts and rotational impacts. (Linear impacts involve a straight-line collision of two objects, like a car driving straight into a wall in crash tests. Rotational impacts cause an object to rotate on its axis, such as the head rotating on the neck.)

Accident and trauma care is an important public health challenge that requires immediate attention. Injury (trauma) is the leading cause of death for all age groups under the age of 44.
Advertisement
"There is ample medical literature that points to rotational impacts as being key contributors to head and neck injuries," said lead researcher Adam Bartsch, Ph.D., Director of the Spine Research Lab in Cleveland Clinic's Center for Spine Health. "However, padding used for boxing and mixed martial arts are still designed to primarily reduce linear - not rotational - acceleration. More work is needed to develop better protective padding to minimize both linear and rotational forces."

The study supports the theory that head and neck impacts accumulate fastest in fighters who don't use protective headgear.

The padding study is one of several projects Cleveland Clinic is undertaking to better detect and prevent brain injuries across a wide range of sports, including football, boxing, hockey and soccer. Teams of researchers are working to make safer youth football helmets (through a grant from NFL Charities); create an Intelligent Mouthguard that measures the number and severity of hits to the head among athletes; produce a blood test that can diagnose concussions; improve helmet safety by comparing modern helmets to vintage leather helmets; and develop an iPad app that uses the device's built-in gyroscope to quantitatively capture pre- and post-game measures of balance, memory and cognition. In Las Vegas, the Cleveland Clinic Lou Ruvo Center for Brain Health has launched a landmark study with professional fighters that will help determine whether MRIs of the brain, along with other tests, can detect subtle changes in brain health that correlate with impaired thinking and functioning. The research teams draw from their experiences of caring for thousands of professional, amateur and youth athletes every year on the sidelines and in clinic.

The human brain is exquisitely intrinsic and is the seat of all emotions. If you are curious about what makes you bad, sad, silly or glad this quiz on the brain will satiate you.
Advertisement
News A-Z
A B C D E F G H I J K L M N O P Q R S T U V W X Y Z
What's New on Medindia