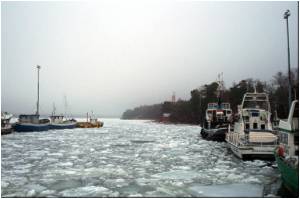 It is well-known that every year thousands brave the frigid winds of Canada's backwoods to spend time in a small wooden hut fishing through a hole in the ice.

It is not a desire to sample the local fish, the tomcod, which doesn't taste very nice anyway, nor the thrill of reeling in "a big one," the tomcod is tiny, that lures the fishermen and their families to the Sainte-Anne River, 180 kilometers (110 miles) northeast of Montreal.

They flock to the isolated shores of the town of Sainte-Anne-de-la-Perade (population 2,500) near the tomcod's breeding grounds for a change of scenery and a unique family outing -- all in the relative comfort of ice fishing shacks, wooden huts only a few feet square, but with all the comforts including heating and electricity.


And there are also the fish, which are so abundant it keeps the fishermen warm just trying to keep up with their catch.

"It is non-stop," Denis Tremblay told AFP as he hooked tiny squares of liver onto his line as bait. "It's hard to keep up."
Advertisement
Tremblay, who came from the big city with his three-year-old son to fish, has been amazed by the abundance of fish in the frozen river.

With garbage bags wrapped around his legs to prevent getting soaked by splashes of icy water, he stared intently at the small dark hole cut into the 40 centimeters (16 inches) thick ice, hoping for a bite.

In a small bucket nearby the fish had begun piling up.

Each winter, up to 800 million tomcod migrate from the nearby Saint Lawrence Seaway past this site to lay eggs upstream.

Between the end of December and mid-February, fishermen only need to poke a hole in the ice to catch huge quantities of tomcod.

Lamarre manages the rentals of some 500 ice fishing cabins on a four-kilometer (2.5-mile) stretch of river that forms a temporary village.

And the "world capital of tomcod fishing," as it is dubbed by locals, continues to attract new visitors, including many new immigrants living in nearby Montreal, Canada's second largest metropolis.

"Italian, Portuguese, Chinese, Russian, Korean ... all of these people, who love to fish, they are coming more and more," said Jeannot Mailhot, who rents some 30 huts for 20 Canadian dollars (US$20) per person for eight hours.

"It's just like being in Siberia!" quipped Russian immigrant Ludmila Yurchenko, noting the sudden drop in temperatures this past week to near -40 degrees Celsius (-40 Fahrenheit).

She used to ice fish in Russia, she said. "But it's much more convenient (here) because we have the whole cabin (to ourselves)."

"And there is a lot of fish," she added, as her three friends busied themselves with their catch.