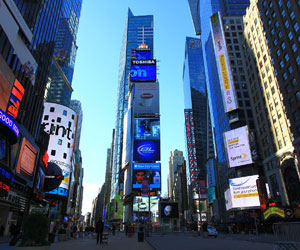 Times Square has been voted as the most happiest and satisfied spot in the New York city.

The flashy strip and its surrounding streets, along with Midtown in general, host the most satisfied people in the city, according to a study of Twitter messages sent from the area.

Researchers from the University of Vermont mapped out the city's happiest areas using a complex formula that can pinpoint tweet locations and rate their relative 'happiness' and 'sadness' based on certain key words, the New York Post reports.


The study also found that the Upper West Side is happier than the Upper East Side.

According to the report, the national study scanned 10 million tweets for 'happy' words such as 'sun' and 'yoga', and 'sad' words such as 'hate' and 'hell'.
Advertisement
While most of Manhattan south of Central Park had people tweeting happily, there were pockets of unhappiness in the East Village, Chelsea and the area around City Hall, the report said.

There were also a large number of sad tweets coming from the area around the United Nations.

Understandably, there also was a clear pocket of unhappy tweets sent from the area surrounding Ground Zero.

Researcher Lewis Mitchell said that Manhattan is also happier than the outer boroughs.

The study also ranked the Twitter 'happiness' state-by-state. New York came in 15th happiest, while Hawaii was first and Louisiana last, it added.