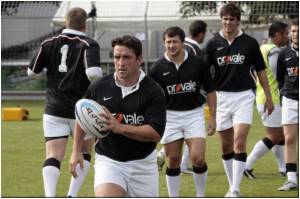 Elite athletes face a higher risk of illness if they travel across more than five time zones to get a competition, reveals study.

The researchers tracked the daily health of 259 elite rugby players competing in the 2010 Super 14 Rugby Tournament.

Anabolic steroids can produce power- packed, adrenaline - pumping performances but they also reflect a saga of condemnation and shame.
Advertisement

In this annual tournament, 14 teams from Australia, South Africa and New Zealand compete over 16 weeks (February to May) at venues in all three countries, and in time zones varying from 2 to 11 hours' difference from their own.


Games are played weekly to a high intensity international standard, accompanied by three to five weekly training sessions over the 16 week period.

Every season can be an allergy season, depending on what you're allergic to. - Clara Chung
Advertisement
The 8 team physicians were asked to complete a daily log of any illness that required medical attention for each member of their squad.

The rate of illness was calculated for 1000 player days, with the total number of player days across all the teams 22,676, based on squad size x days of play.

Throughout the 16 weeks of the tournament, 469 illnesses were reported in 187 of the players (just over 72%), giving an overall incidence of just under 21 per 1000 player days.

But the rate varied considerably, depending on where the matches were played.

For matches played on home turf before international travel, the incidence was 15.4/1000 player days.

But this rose to 32.6/1000 player days for matches played in locations that were 5+ hours' time difference away from home, irrespective of direction of travel.

For matches played on return back home after international travel, the incidence fell back to 10.6/1000 player days.

Almost one in three of all illnesses reported were respiratory conditions (just under 31%), followed by gut problems (27.5%) and skin and soft tissue conditions (22.5%).Infections accounted for most of the reported illnesses.

There was little difference in the number of infections reported for each of the months, although there was a slight fall in incidence during April.

It has been suggested that air travel might explain the higher risk of illness, but if that were the case, infection rates would also be higher after returning home, say the authorsat least for respiratory infections.

"The results from our study indicate that the illness risk is not directly related to the travel itself, but rather the arrival and location of the team at a distant destination," write the authors.

They suggest that various stressors could be involved, including changes in pollution, temperature, allergens, humidity, altitude, as well as different food, germs, and culture.

Cyberatheletes Might Suffer from Globesity. Unable to Decipher? Read On

A digital native is in all probability a cyberathelete who would not suffer from boomeritis but is at a risk of globesity.
Advertisement
<< Natural Birth, Not C-section, Triggers Brain-boosting Protei...
Active Video Games can Lead to More Exercise: Study >>

Prolonged Concussion Symptoms can be Relieved With Controlled Exercise

Diet and Nutrition Tips for Athletes
News Archive
News Resource
Advertisement
News Category
Why Mosquitoes are Attracted to Only Some People? Norovirus, Stomach Viruses can Spread Through Saliva Putting the Brakes on a Bacterium That Cause Digestive Problem Monkeypox May Become a Sexually Transmitted Disease in America This Strain Poses World's Greatest Threat to Human Health
More News
Sign up for Wellness Consult a Doctor Sign up for Selfcare

More News on:
Diet and Nutrition Tips for Athletes