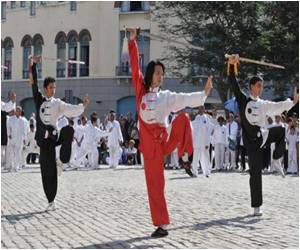 The ties that have divided Cubans from expats in Florida for more than half a century have now grown with a substantial rise and trade and travel thereby bridging the gulf.

Some experts say relations are better than at any time since the rupture in diplomatic ties between Havana and Washington in the early 1960's, in the aftermath of the Cuban Revolution -- in part because of looser travel restrictions on both sides.

'Paquete' Used by Cubans to Get Hollywood, Football Fix

In communist Cuba, black market sales of USB sticks loaded with Hollywood blockbusters, pop music or football are booming like never before.
Advertisement

The ties "have never been so diverse or so rich" between the 11 million inhabitants on the communist-run island and the 1.5 million Cuban Americans in the United States, said Carlos Alzugaray, a Cuban former diplomat and university professor.


Denisse Delgado, a sociologist at the Catholic University in San Antonio, Spain, said the current climate of increased travel offers greater opportunity for "the transmission of ideas, values and ways of living" that can help recreate common ground for the two communities seeking to bridge a decades-long political divide.

A medical expert has said that more than 5,000 patients have received stem cell treatment in Cuba since its procedure was introduced in 2004.
Advertisement
Starting in January 2013, Cuba opened its doors, allowing more of its citizens to travel abroad.

At the same time, the United States greatly increased the number of visas it issued to Cubans. It also extended their validity to five years, allowing visa holders to make multiple trips.

According to the Cuban Interests Section here -- Washington's diplomatic and consular presence in Havana in the absence of an embassy -- the United States approved 19,500 tourist visas to Cubans in the second half of 2013, a 27 percent increase over the same period in 2012.

In the other direction, a record 173,550 travelers went to Cuba from the United States, many of whom had family members on the island. They came bringing hard currency that will be used to help improve the lives of their relatives.

The dollars allow Cubans to purchase sought-after commodities that otherwise would be out of reach, like bicycles, washing machines and televisions.

For the first time, Havana is allowing a large number of free market enterprises to be created, and it is encouraging self-employment by enterprising Cuban taxi drivers, barbers and restaurateurs.

Officially, a decades-old, US-imposed economic embargo continues to forbid most Americans from spending money in Cuba.

But cash is flowing a bit more freely on the island since President Barack Obama in 2009 freed up rules surrounding the cash remittances from Cuban American to relatives on the island.

In the current climate, "we can estimate that more than 50 percent of the new businesses being opened in Cuba are established with capital from friends or relatives in the United States," said Jorge de Armas, an analyst with the Miami-based research group Cuban Americans for Engagement (CAFE), which aims to foster closer bilateral ties.

Much of the money has been going into "paladares" -- family style restaurants that have been springing up like mushrooms, and now number 400 in Havana alone.

Raul Castro, 81, took over the reins of government from his ailing older brother Fidel in 2006 and has gradually been overhauling island's antiquated Soviet-style economy.

Measures include trimming state payrolls and allowing more types of self-employment, handing over unused land to farmers, and allowing private ownership of things like homes, cars, mobile phones and computers.

His goal is to liberalize Cuba's economy and encourage more private entrepreneurship, but at the same time maintain a key role for the Cuban state through joint ventures.

The reforms are also aimed at trimming back the bloated public sector. The government still controls 90 percent of the economy and is by far the main source of jobs on the island.

For the past three decades,for an hour a day, Cubans forget their litany of woes with the help of Brazilian telenovelas.
Advertisement
<< Research: Oxygen Reduces the Heart's Ability to Regenerate
Leave the Candy, Take the Bat >>