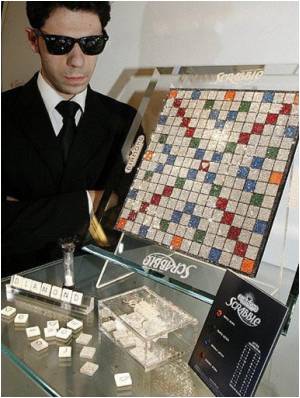 Nearly 3000 additional words have been added to the official scrabble words list. Words like "darknet", facebook", and "webzine" have made it to the official Scrabble Words book.

New slang terms for instance,"innit", "thang" and "grrl", have been added for use while playing the board game.

Playing board games like Scrabble or Cluedo can help boost children's language and speech skills.
Advertisement

Robert Groves, editor of Collins English Dictionaries said: "The latest edition adds nearly 3,000 new words to the existing quarter of a million available to Scrabble players. These additions are an eclectic mix of new technological jargon, overseas English, recent colloquialisms, street slang, and a few phrases that had not made it on to the list until now."

US Teens Charged With Gang Raping a Woman

Two US teenagers have been charged with raping a mother, forcing her 12-year-old son to join them in the attack, then beating him and pouring cleaning solution into his eyes.
Advertisement
<< Five Years With a Hangover in Britain
TV Watching Trend Among Children >>

In a new study it has been found that even though babies are too young to talk, they can understand words and process them in a grown up way.

A Dog Which can Comprehend More Than 1000 Words!

It appears that pet dogs can understand most of what we tell them, and as an example, meet the dog that can understand more than 1000 words.
Advertisement
News A-Z
A B C D E F G H I J K L M N O P Q R S T U V W X Y Z
What's New on Medindia