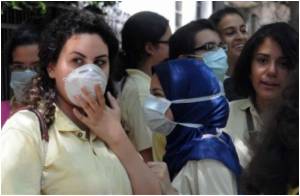 Three new deaths from the swine flu virus have been reported in Oman.

The health ministry said "82 new cases of H1N1 virus have been registered in May, three of them fatal," without elaborating.

The World Health Organisation declared the swine flu pandemic over in August 2010, more than a year after the H1N1 virus that emerged from Mexico sparked panic and killed thousands of people around the world.


But his past February, health authorities in Washington said the swine flu strain has re-emerged.

In January, two men died of it in northern Spain, where an outbreak of the H1N1 virus left more than 40 people in hospital.

In 2009, Oman recorded six deaths from swine flu, and authorities in the Gulf sultanate launched an innoculation campaign against the virus.

Egypt Swine Flu Toll Touches 38 in Over 2 Months
Swine flu toll in Egypt has touched 38 since December last, according to the health ministry. Since ...