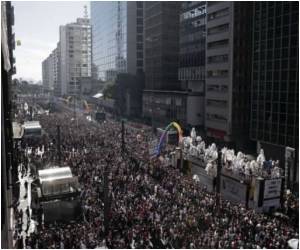 Homosexuals and their supporters filled Sao Paulo's main avenue Sunday for an annual Gay Parade that organizers claimed was the biggest in the world with an estimated three million participants.

The Delhi High Court ruled last year that a ban on homosexual acts, in place since British colonial times, was discriminatory and unconstitutional.
Advertisement

Organizers this year sought to place the gay agenda in political campaigns for Brazilian presidential elections in October by promoting the theme "Vote against homophobia."


Gay rights groups say that although Brazil is a relatively open society in terms of homosexuality, 198 gays were killed last year in homophobic attacks.

UN chief Ban Ki-moon persuaded Malawi's president to pardon a gay couple jailed for holding a wedding, but his call to reform anti-gay laws poses a challenge to most of Africa.
Advertisement
The gay pride association running the parade said that since it started in 1997, the event has become the biggest gay parade in the world, outdoing celebrations in San Francisco and Sydney.

The Sao Paulo parade is financed by the state government with sponsorship from Brazil's state-run oil company Petrobras.