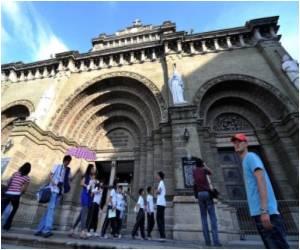 In a bid to set a new world record for the largest flaming image using candles, hundreds of people lined up in a dark, muddy field to form a giant map of the Philippines.

The project by the Middle Way Meditation Institute in the central island of Panay seemed to be successful with Seyda Subasi-Gemici, a representative from Guinness World Records, saying that their 56,680 candles appeared to have topped the old record of 35,478 candles forming a company logo in Pakistan in December, 2009. The organisation will confirm the record at a later date.

The candle-lit map, along with a logo of the organiser and the motto "world peace through inner peace" came twinkling into formation despite heavy rain before the event discouraging many volunteers from taking part.


But the rain stopped in time, allowing enough people to participate in the most recent record-setting attempt in the Southeast Asian archipelago.
Advertisement
The candle map was intended "to promote inner peace, which is through meditation, so conflicts and misunderstanding will be reduced," said Nguyen Ha, a publicist for the organisers.

"That's why we hold these large-scale events to gather many people, to build an atmosphere of peace... based on the theme of light," the publicist added.

Setting new world records has become quite popular in the Philippines, with about 10,000 taking part in the largest human formation for the symbol of a woman last month and more than 3,000 signing up as organ donors in one place in February.

Source: AFP
Advertisement
<< Web Information on Colon Cancer too Complex, Do Not Address...
Hereditary Diseases Affecting the Skeleton are Heterogeneou... >>

Organ Donor Record Breaks, Thousands Sign Up for Organ Donation in Philippines
With thousands of people from the Philippines taking a pledge to donate their kidneys and other ......

Philippines Plans to Eliminate Rabies Deaths in Two Years
The Philippines health department has said that it plans to vaccinate seven million dogs within two ...