Thousands of Americans Queue for Half as Many Swine Flu Shots

It is "vaccination by natural selection," lamented 51-year-old Cindy Rochen as she waited with thousands of others outside a clinic in this Washington suburb for a swine flu shot.

"You could be Stephen Hawking and you wouldn't get this flu shot if you didn't have an inside track to get inside that clinic," said Rochen, who walks with the aid of a cane, suffers from an autoimmune disease, a bone illness and asthma and can only have the injectable form of the vaccine. 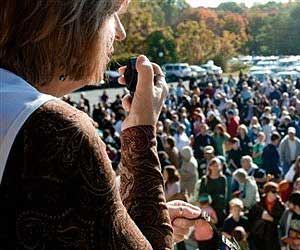 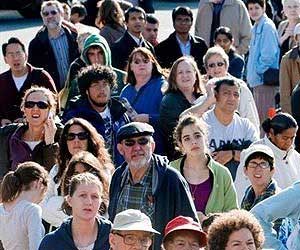 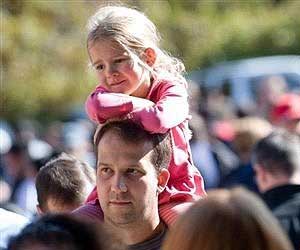 Steve Kutchi of Frederick, Maryland and his daugther wait in line to receive an H1N1 vaccine 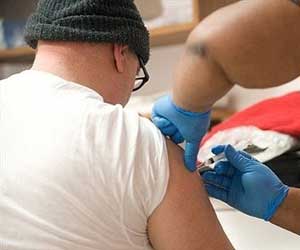 A man receives an injection during H1N1 flu inoculations

The 200 doses of injectable vaccine that Montgomery County health officials had to hand on Wednesday for their third public H1N1 influenza vaccination campaign ran out within an hour of the clinic opening its doors.


"No more injectable," county immunization coordinator Mark Hodge shouted at around 10:00 am to anyone who could hear him in the crowd of at least 3,000 people.
Advertisement
A pregnant woman who had been waiting for two hours in the line that snaked around the vast car park and for several blocks down the suburban streets began sobbing.

A father accompanying his severely asthmatic daughter who had endured the long wait in the sun outside the clinic, filled in all the paperwork to get his daughter vaccinated and was at the front of line to go upstairs for the injection, nearly broke down.

"I told him, please don't. If you cry, we're all going to," said April, one of a dozen "medical screeners" weeding out those who could be vaccinated with the nasal spray from those who had to have one of the precious few doses of injectable vaccine: pregnant women, children under two, and people with certain chronic ailments, including severe asthma.

The nasal spray vaccine contains live but greatly weakened virus, while the injectable vaccine is made with killed H1N1 virus.

Montgomery County health officials had a total of 1,400 doses of H1N1 vaccine when the inoculation clinic began before 9:00 am Wednesday, and the bulk -- 1,200 doses -- was nasal spray.

While Health Officer Ulder Tillman got word that 2,000 additional doses of the nasal spray were being sent over from another clinic about 10 miles (16 kilometers) away, officials had no idea when the next batch of injectable vaccine would arrive.

"There are no more injectable clinics scheduled until we get more vaccine. We don't know when that will be," Hodge said.

Like the rest of the United States, Maryland is feeling the pinch of a shortage of H1N1 vaccine, caused in part by the barrage of tests the vaccine is subjected to, to ensure it is safe and effective.

The shortage was announced last week by the Centers for Disease Control and Prevention (CDC), which scaled back by a quarter projections for the number of doses that would be available by the end of October.

Earlier CDC projections had put the number of doses available at 40 million. Now, up to 30 million are expected to be available by the end of the month.

As the line grew outside the Rockville clinic Wednesday, US Health and Human Services Secretary Kathleen Sebelius was acknowledging to a Senate committee that demand for the swine flu virus was outstripping supply.

That was obvious outside the clinic, where thousands were waiting in vain.

Some had even slept in their cars to be sure they had a shot of getting a shot.

But those who needed the injectable vaccine and got to the clinic after 8:00 am -- an hour before the vaccination drive was due to get under way -- looked to be out of luck.

A heavily pregnant Heather Hoke, who is due to give birth next week, made it inside the clinic with three-year-old son, Jess, only to be told there was no more injectable vaccine.

"Being in a high-risk category, I'd hoped there would be more available. My main concern is not about the safety of the vaccine, but that I am able to pass antibodies onto the newborn," she said.

Beth Williams, 35, whose baby is due in around eight weeks, had come to the clinic with her husband Kevin because "nobody has the vaccine anywhere -- not my obstetrician, not my regular doctor."

Williams was still around 100 people back in the line when the "No more injectable" call went up.