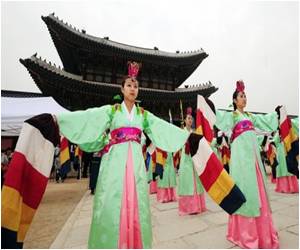 Since the death of their "messiah" and controversial church founder Sun Myung Moon, thousands of Unification Church members got married in a mass wedding in South Korea.

Some 3,500 identically-dressed couples -- many of mixed nationality who had met just days before -- took part in the ceremony at the church's global headquarters in Gapyeong, east of the capital Seoul.

Mass weddings, some held in giant sports stadia with tens of thousands of couples, have long been a signature feature of the church and one that "Moonie" critics have pointed to as evidence of cult underpinnings.


Sunday's event carried a special resonance, with Moon's 70-year-old widow Hak Ja Han presiding for the first time without her husband who died five months ago, aged 92, of complications from pneumonia.
Advertisement
The church's mass weddings began in the early 1960s. At first, they involved just a few dozen couples but the numbers mushroomed over the years.

Nearly all were personally matched by Moon, who taught that romantic love led to sexual promiscuity, mismatched couples and dysfunctional societies.

Many were married just hours after meeting for the first time, and Moon's preference for cross-cultural, international marriages meant that they often shared no common language.

In recent years, matchmaking responsibilities have shifted towards parents, but 400 of the church members married on Sunday had chosen to be paired off a few days before at an "engagement ceremony" presided over by Moon's widow.

"Yeah, I was pretty nervous," admitted Jin Davidson, a 21-year-old student from the United States, whose Australian father and Japanese mother were matched by Moon.

"Then all of a sudden she popped up in front of me, and I said okay," Davidson said of his Japanese bride-to-be, Kotona Shimizu, also 21.

"We struggle a little to communicate right now, as I speak no Japanese at all, and she only speaks a little English, but we see it as an exciting challenge and proof of our faith," he said.

Those who choose to be matched by the church must confirm under oath that they are virgins, and after their wedding the couple must refrain from sexual relations for a minimum of 40 days.

In a sign of the church moving with the times, Lisa, from Trinidad and Tobago, first met her bridegroom, Hubert from Poland, on Skype after being put in contact by family and church friends.

Hubert visited her family in December and the couple decided to attend Sunday's event in South Korea to receive the blessing of "mother Moon".

"I've been waiting for him all my life," Lisa said. "Language isn't such an issue. We're connected by the church."

The ceremony was held in the same vast, covered stadium where Moon's elaborate funeral was held on September 15.

The musical warm up acts were an eclectic mix, including a rousing version of "Libiamo..," the drinking song from La Traviata, some Buddhist chanting and a children's choir singing "Oh Happy Day".

Hak Ja Han entered to the strains of Handel's Hallelujah chorus and led the couples in their vows. Another 12,000 couples around the world took part via a live Internet feed.

Revered by his followers but denounced by critics as a charlatan who brainwashed church members, Moon was a deeply divisive figure whose shadowy business dealings saw him jailed in the United States.

The teachings of the Unification Church are based on the Bible but with new interpretations, and Moon saw his role as completing the unfulfilled mission of Jesus to restore humanity to a state of "sinless" purity.

While it claims a worldwide following of three million, experts suggest the core membership is far smaller.

Romantic Texting Allowed as Partial Grounds for Divorce: SKorea
Sending romantic text messages to someone other than your spouse can be partial grounds for a ......