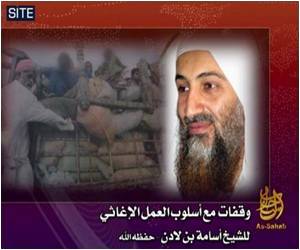 Tears, cheering and waving flags, thousands of people gathered at Ground Zero in New York to celebrate the killing of Osama bin Laden.

"This is a very emotional day," cried Mari Zang, a 30-year-old attorney. "I know I'm going to be really, really happy at some point, but first I need to get the emotion out."

Genes and stress may have led to Omar Bin Laden's schizophrenia, according to medical experts.
Advertisement

Tears rolling down her cheeks, Zang said: "It makes me feel so proud to be able to say we didn't give up."


Americans' emotional reaction to the late night news that their special forces had slain the Al-Qaeda leader reflected years of frustration at the way the mastermind of the September 11, 2001 attacks thumbed his nose at his pursuers.

A sister of al Qaeda leader Osama bin Laden, has been secretly flown to London for private cancer treatment that is costing more than 100,000 pounds.
Advertisement
Nowhere was the emotion deeper than in New York where the mass slaughter of 9/11 dealt the city's famous buzz and self-confidence a staggering blow.

Police chief Raymond Kelly called the death of bin Laden a "milestone" for the families of the victims. Mayor Michael Bloomberg said: "New Yorkers have waited nearly 10 years for this news."

Thick crowds poured along streets around Ground Zero, where after years of delays work on new World Trade Center skyscrapers is proceeding rapidly. Police, including helmeted anti-terrorism officers with rifles, were also out in force, directing the flow of pedestrians.

Many came to connect with a place that has become a sacred part of New York folklore.

"Today I'm just proud to be an American," said waiter James Vigliatura, 51, holding a flag and the celebratory front page of a newspaper titled: "GOT HIM!"

"I'm here to celebrate his death and support the families that lost loved ones on 9/11."

Sergeant Michael Biscardi, from the army's military police, said he passed by Ground Zero on his way to work to pay his respects.

He'd been on the phone arguing with an ex-girlfriend the previous night when he got the news from a friend texting on his cellphone. "I hung up the phone," he said. "Then I went on Facebook and I started calling all my buddies overseas."

The news was also personal for construction workers employed at Ground Zero.

As the men tasked with restoring life at the vast hole left by the destroyed Twin Towers, they labor under the glare of politicians, visiting dignitaries, tourists and the many visiting just to remember the nearly 3,000 dead.

"We didn't give up. Hell no. We don't go back. No -- we go only up!" said Luis Zinin, 50, pointing to the metal and glass grid of the tallest tower rising from the rubble.

But Zinin and his co-workers expressed the doubts that remain after the dramatic end to bin Laden's life.

"It's just amazing that he was hiding in a country that is our ally," Zinin said.

"I don't think it's over. No. Now we'll get vengeance and it can come anywhere, anytime," Zinin said.

Frenchman Pierre Camatte went to Mali with eight kilogrammes of dried leaves from a medicinal herb and the dream of finding an alternative treatment for malaria ravaging the area.
Advertisement
<< Women and Heart Attack Risk
FATE Results Prove to be Useful in Palliative Care >>

Abnormal Increase in Cancers Among Firefighters of 9/11