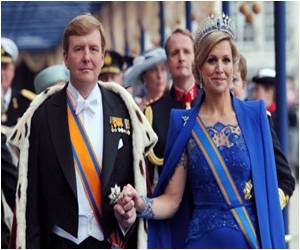 With Willem-Alexander to be crowned as Holland's first king in more than 120 years, Amsterdam was flooded with thousands of people wearing orange suits, wigs and sunglasses.

Over 25,000 people packed Amsterdam's central Dam Square in front of the royal palace where Queen Beatrix signed her abdication.

"Today is a day in which we get together as the Dutch and celebrate and the monarchy is of course a part of it," Nick van Boor, 25, told AFP, pushing his way through thronged streets.


"We really hope we can catch a glimpse of them," he added, dressed in an all-orange outfit, using a Dutch flag as a cape and his hair dyed bright orange.
Advertisement
He was hoping to see the new king and Queen Maxima on the palace balcony.

Streets around the royal palace were blocked off with typically Dutch obstacles: giant flower beds of tulips of every colour.

Some were frustrated not to be able to get onto the Dam in time for the abdication, after which people headed in their thousands to the city's Museumplein.

The large open space is home to the Rijksmuseum and Van Gogh Museum, but today given over to concerts and partying.

"This is fantastic!" said Anne Boonjer, 60 as she walked down to the Dam, recalling the riots that accompanied Beatrix's investiture in 1980 because of a housing crisis.

"I was here that day and it was truly awful, with bombs being thrown," she said.

Over 10,000 police are patrolling the event, and Amsterdam mayor Eberhard van der Laan warned ahead of the celebrations that police should be careful not to overreact.

Many people took to boats on Amsterdam's famed canals after the abdication, drinking, smoking and dancing, all clad in orange.

"The protocol blah-blah is almost over now, so we can start the party," shouted a young man on a barge carrying around 30 people jumping to a heavy techno beat.

Amsterdam's many immigrant workers also got in on the act, with a bicycle taxi driver from Georgia who only identified himself as Bojuk saying: "Today's going to be good for business."

People made last-minute purchases of a range of gratuitously orange products, including vuvuzelas and cannabis lollypops.

Some streets of the Dutch capital were littered with the detritus from celebrations of Queen's Night on Monday, a sea of plastic glasses and crushed beer cans and puddles of vomit.

"This enthronement is the most beautiful and entertaining event," said Alex Hamstel, 41, wearing an orange suit and matching cowboy hat.

Some sought to grab a few hours sleep before once more picking up the party that is taking over Amsterdam's picturesque streets and canals throughout the day and into Tuesday night.

"I'm really drunk, I've got a headache, I'm going home," said Maarten, 32, trying to walk in the opposite direction to the swelling river of people.

"If I want to go out again tonight, I'm going to have to get some rest," he told AFP.

At Amsterdam's central train station, a man was busy emptying bins, wearing an inflatable orange crown on his head.

"Yeah, well, I'm working, that's life, but that's no reason not to be in a good mood," the worker said.

"This is a party for everyone and I'm going to make the most of it," he said, declining to give his name.

The royal family was to take a boat tour behind Amsterdam central station in the evening, accompanied by a flotilla of pleasure boats and historic ships, including a large gay pride boat full of queens to rival Maxima.

Royal Couple's Footsteps Followed by Tourists in London
Two American girls debate what Kate Middleton will look like at her wedding in five days' time even ...