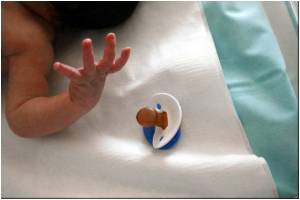 Melinda Star Guido, a baby believed to be one of the world's smallest infant ever to survive left hospital in Los Angeles, doctors said.

The baby was born last August, 16 weeks early, weighing only 9.5 ounces (270 grammes) -- less than a can of soda or the same as two iPhones -- and has spent nearly five months in a neonatal intensive care unit.

"I am so excited to finally have my baby come home," said her mother Haydee Ibarra, 22. "We have waited almost five months for this moment. It is so wonderful and we are ready to bring Melinda home."


She is the third smallest baby to survive, according to Global Birth Registry figures cited by LA County health officials.

Dr Rangasamy Ramanathan, neonatology chief at the LA County-USC Medical Center, said he wasn't initially sure if Melinda was going to survive beyond a few days.

This scoring system is used to identify babies at risk for complications or bad outcome from delivery during the early minutes of their life and determine if any medical intervention is needed immediately.
Advertisement
"This doesn't happen every day. In my 30 years here, ... this is the first time it ever happened that we were able to discharge a baby who weighed less than 400 grams, or 300 grams," he said.

"We have reached a milestone by being able to see Melinda go home," he added "We are hopeful to see many more milestones accomplished in Melinda's development as we follow her care over the next six years."

Caring for a Premature Baby