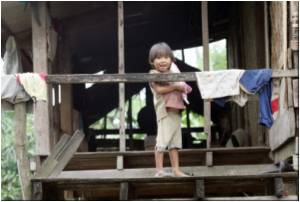 In southern Afghanistan, around a third of young children are acutely malnourished, reveals survey.

The figures show there has been little improvement in tackling malnutrition, despite the billions of dollars of aid money pumped into the war-torn country since a 2001 US-led invasion brought down the Taliban.

According to the Multiple Indicator Cluster Survey, 18 percent of children -- about one million -- suffer from malnutrition across the country.


The south, which has been the most violent and least developed part of the country, is the worst hit with acute malnutrition at 29.5 percent among under fives, according to the survey conducted from October 2010 to May 2011.

Special report on the WHO recommended obesity measurement tests for kids, to tackle malnutrition and childhood obesity, with a special emphasis on the looming obesity epidemic in the western world.
Advertisement
Widespread poverty and insecurity mean aid organisations have a lighter footprint in the south and healthcare is less accessible than in other parts of the country.

A 30 percent rate of severe malnutrition among children is one condition for a famine, although Afghanistan does not meet the other criteria for mortality and hunger for a UN famine declaration.

The lowest incidence of malnutrition -- around 13 percent -- was found in the centre of the country, where the Taliban have little influence.

Christine Roehrs, a spokeswoman for Save the Children, told AFP that malnutrition has been ignored for too long by both donors and the Afghan government, calling it one of the biggest challenges for the future of the country.

"The first national survey was done in 2004 and it shows that levels of malnutrition are as high today as they were then," she said.

Roehrs said malnutrition contributes to a third of all child deaths.

"Every day, 275 children die in Afghanistan, most of them before their fifth birthday and due to preventable illnesses. Often, malnutrition was the underlying cause of this."

She called for a broad and comprehensive response to educate parents on how best to feed their babies in a country where many give them tea and bread only.

But she voiced concern that the phased transition of security control to Afghan forces as NATO combat troops leave by 2014 could negatively impact efforts.

"Nutrition services have not been funded and prioritised for a long time. This is beginning to change, but we are concerned that in the midst of the complicated transition process, this challenge will not get the attention it needs," she said.