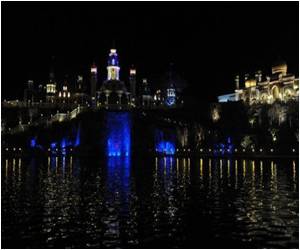 In France, a theme park inspired by Antoine de Saint-Exupery's timeless classic "The Little Prince" opened this week giving visitors a chance to recall the author's claim that "all grown-ups were children first".

The Little Prince Park hopes to draw 150,000 visitors a year with its hot air balloons, slides, live foxes and sheep and hi-tech learning tools based around the surreal tale of a golden-haired boy who lives on a planet a little larger than himself.

"Our target audience is children between two and 12 years-old, as well as every adult who remembers that they were once a child," said Jerome Giacomoni, one of the creators of the project near the French border with Germany.


By far Saint-Exupery's most famous work, "The Little Prince" has been translated into more than 270 languages since being published in 1943.

The poetic novella about friendship, love and loss is one of the best-selling books of all time.
Advertisement
"The Little Prince is more than a brand, it is a set of values," said Giacomoni.

The park is centred around two anchored hot air ballons -- a nod to the succession of planets visited by the storybook hero -- which will hoist visitors 150 metres (500 feet) into the sky to enjoy views over the Vosges Mountains.

Back on solid ground, attractions range from the natural -- petting animals -- to the cutting edge, with a 3D cinema and an interactive dialogue with computer-generated book characters.

Children can even play in a real biplane, recalling the exploits of seasoned pilot Saint-Exupery, who disappeared on a solo mission in 1944.

The Saint-Exupery family granted the rights for the park, the latest in a string of Little Prince-themed projects with an opera and feature length film also in the works.

Source: AFP
Advertisement
<< Research may Reveal What Happens in Female Brains During Ma...
Stem Cells Have the Potential to Develop into Any Cell Type >>

New Titanic Theme Park in China
In a theme park in China, a life-sized replica of the doomed ship Titanic is set to become the ......