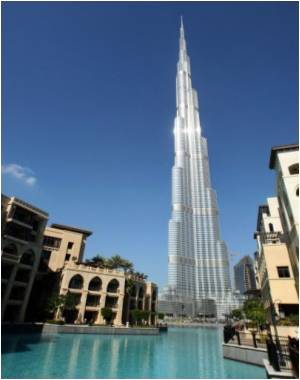 Dubai opened on Sunday a restaurant 422 metres (1,350 feet) up in the sky on the 122nd floor of the world's tallest building, Burj Khalifa, its developers said.

Atmosphere in Dubai's 828-metre (2,716.5-feet) building is "one of the finest luxury dining and lounge experiences in the world," said Emaar Hospitality Group, an arm of giant property developer Emaar.

'Camel' the Burger King at a Dubai Eatery

At two levels below the tower's observation deck, the "world's highest restaurant" can host "over 210 guests and features a spacious arrival lobby, a main dining floor, private dining rooms and display cooking stations."


In addition to apartments, offices and Italian designer Giorgio Armani's signature hotel, the building has an observation deck on the 124th floor, open to visitors at an entrance fee of at least 100 dirhams (27 dollars) per adult.

Public Kissing can Attract a Jail Term in Dubai, but Prostitution Thrives

Couples caught kissing in public are jailed in Dubai, but on the other hand, prostitution is thriving in the state.
Advertisement
Emaar spent 1.5 billion dollars on the tower, named after United Arab Emirates (UAE) President Sheikh Khalifa bin Zayed al-Nahayan who came to the aid of Dubai, hit by the global financial crisis.

Oil-rich Abu Dhabi extended a lifeline of 10 billion dollars, on top of the same amount from the UAE central bank, to bail out Dubai's heavily-indebted state firms in 2009.

Beijing authorities plan to build a seven-star hotel modelled after Dubai's Burj Khalifa, the world's tallest building.
Advertisement
Advertisement
This site uses cookies to deliver our services.By using our site, you acknowledge that you have read and understand our Cookie Policy, Privacy Policy, and our Terms of Use  Ok, Got it. Close
×