The World Waits With Bated Breath for Kate's Dress 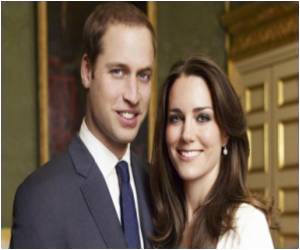 Two billion viewers, 1,900 guests, four bridesmaids and two cakes -- but when Prince William and Kate Middleton marry on April 29, there can only be one dress.

All eyes will be on Kate's wedding gown as she walks down the aisle at Westminster Abbey, as a symbol of her personality, her style and crucially, what kind of queen she may one day become.

Grapevine has suggested that Prince William's wedding to Kate Middleton is wide open to a terror attack.
Advertisement

Palace officials have refused to divulge details of the dress to ensure the maximum impact when Kate steps out of the car -- but also ensuring that expectations are impossibly high.


"Her dress is not simply her wedding dress but a big flag, symbolising her taste, her commitment (or otherwise) to fashion, her attitude to money at a time when the country is in economic doldrums," said Alexandra Shulman, the editor of the British edition of Vogue, in a recent article.

In a sign of modern times, royal couple Prince William and Kate Middleton have revealed their plans to live a modest life after they tie the knot.
Advertisement
She added that "this dress is so much more than a dress".

From the moment she appears, Kate's gown will become the subject of countless blogs and Tweets, while retailers will move quickly to get reproductions on the high streets and the image printed on souvenirs.

"We have to remember that this dress is going to be seen forever. She is our future queen," said Caroline Castigliano, a British wedding dress designer.

The media have named several candidates to make the gown, including Sarah Burton, creative director at Alexander McQueen, and Sophie Cranston, a relative unknown who worked for McQueen before setting up her own label, Libelula.

But in the absence of hard facts, experts are left to speculate on what kind of dress would suit Kate and what would be fitting of the bride of the second-in-line to the throne.

William's mother Diana wore a voluminous fairytale gown with a huge train when she married Prince Charles in 1981, but modern fashion demands something sleeker. Kate will also want to make the most of her slim figure.

However, she must also meet the demands of her 13th century Gothic surroundings, not to mention the expectations of the assembled guests and the estimated two billion viewers watching on television at home.

"Because of the setting and because of her role it needs to have a certain element of drama about it," said Edwina Ehrman, curator of a forthcoming exhibition on wedding gowns at the Victoria and Albert Museum in London.

"Westminster Abbey is a vast building and she will look like a tiny speck unless she wears something with some length in a train, or volume."

The dress will almost certainly be white and most commentators believe she will wear a veil, although whether this will be accompanied by a tiara, the ultimate royal accessory, depends on what image Kate wants to project.

"The unknown is how far she's going to present herself as absolutely the traditional bride, and how far her designer might collaborate with her just to give her that bit of difference," Ehrman told AFP.

Kate's style is not to everyone's taste -- Vivienne Westwood has confirmed she is not making the dress because the bride-to-be does not share hers.

In public appearances Kate has worn clothes from high street labels such as Reiss or Whistles, which have been simple but elegant.

"Kate should remain true to herself on her wedding day. I'd like to see her looking natural and fresh with minimal, but polished, make-up," said Lucy Yeomans, editor of women's magazine Harper's Bazaar.

In her new royal role, Kate must think beyond how she looks to how she is perceived -- Britain is still struggling with the impact of a long and deep recession and something too flashy may be seen as insensitive.

"She's got a very difficult balance to strike between wearing something that we think is worthy of the future queen, but also not overdoing it," said Ehrman, adding that "whatever it looks like, it's going to be expensive".

The reception in Buckingham Palace will include not just one, but two cakes. One will be more traditional and other Prince's childhood favorite.
Advertisement
Advertisement
This site uses cookies to deliver our services.By using our site, you acknowledge that you have read and understand our Cookie Policy, Privacy Policy, and our Terms of Use  Ok, Got it. Close
×