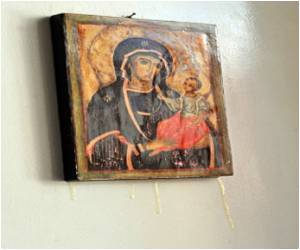 Catholic faithful, for 700 years have articulated veneration to the Virgin Mary by creating an elaborate wardrobe for the mother and child, displayed on a new exhibit in Lyon, France.

Playfully entitled "Fashion Icon", the show explores how from the 12th to the 19th centuries, clothes were cut to adorn the Virgin, sometimes becoming objects of worship in their own right.

Every night in the run-up to Christmas thousands of Egypt's Coptic Christians have been gathering in a Cairo suburb eager for a glimpse of a vision that has given hope to their marginalised community.
Advertisement

"When you clothe a statue you give it a powerful presence -- and since the fabrics used were extremely precious, you also introduce a distance," explained Maximilien Durand, director of the Lyon fabric museum and curator of the show, which runs until March 25.


"Clothes were cut for all kinds of statues -- from great icons in sanctuaries and the mannequins used in religious processions, down to the tiny statues of Mary worshipped in convents and household chapels."

According to the owner, hundreds of people have been flocking to a house in a Paris suburb over recent weeks to see an icon of the Virgin Mary shed tears of oil .
Advertisement
The practice spread massively from the 13th to 15th centuries, but come the 16th century, with the Roman Catholic Church under attack from Protestant critics, the clergy started to worry the statues of Mary had become indecent.

"They were dressed like real women, like fashion icons, with real hair, wigs, even make-up," Durand said.

In 1530, Catholic authorities ruled that the Virgin could be dressed -- so long as the clothes were not too close-fitting -- allowing the practice to thrive until the 19th century when the Church turned against it.

"The clothes people gave were always special, either precious or because they symbolised a key moment in their lives," said Durand.

"Women would often donate their wedding dresses for the statues, symbolically a way of holding onto their own virginity."

When Marie-Antoinette's eldest daughter was born, the French queen asked her dressmaker to fashion a costume for the Virgin in Monflieres north of Paris, from one of her own dresses.

"Today it is the only surviving dress known to have belonged to Marie-Antoinette, since her entire wardrobe has since been lost," said Durand.

The exhibit features a wardrobe of tiny statue dresses from Marie-Antoinette's day, cut from a man's waistcoat or a court apron.

Other costumes were specially made, embroidered with flowers that in the 17th and 18th centuries suggested the virtues of the Virgin: violets for modesty, lilies for purity, roses for charity.

The show spotlights the wardrobe of one particular statue -- the black Virgin from the Daurade basilica in Toulouse in southwestern France -- with more than a dozen metre-high triangular robes and matching baby Jesus outfits.

The first dresses date from the 18th century, up to the present day with a collection created for her two years ago by eight fashion designers, including Jean-Charles de Castelbajac and Franck Sorbier.

One dress is typical of the era of Louis XVI and Marie-Antoinette, with Chinese-inspired motifs and ribbon-tied bunches of flowers.

"You can see from the folds that it was a French-style dress that was turned into a statue's costume," Durand said.

Another is cut from a high-quality cashmere shawl, the ultimate fashion accessory in the early 19th century, imported from India and brought into style by the Empress Josephine.

The Virgin's changing dress mirrors the colours of the Catholic liturgy, with white for feasts, green for everyday, red to commemorate martyrs, purple for Lent and black for mourning.

The contemporary costumes are also rich in subtext.

Castelbajac clothed her in camouflage print above a glittery band suggestive of a snake's scales, an allusion to depictions of the immaculate conception in which the Virgin tramples the serpent underfoot.

Sorbier, meanwhile, chose metallic-looking materials, echoing the gold and silver fabrics traditionally offered to the lady of Toulouse, according to records kept by French monks.

The Toulouse statue was burned during the French Revolution in 1789. When it was recreated, the Church ordered the faces and hands of the mother and child to be sculpted, but used simple wooden planks for their bodies.

"People had become so used to seeing the statue clothed, they could no longer imagine her undressed," Durand said. "What had come to be considered sacred was the dress. The statue had become secondary."

Lacoste has presented its Spring 2012 collection with a focus on women.
Advertisement
<< Higher Risk of Exposure to the Influenza A (H1N1) Virus Amo...
Poo-Powered 'Glowing' Bacteria to Light Up Your Home, Now >>

Diaphragmatic Hernia Noscaphene (Noscapine) Blood - Sugar Chart Loram (2 mg) (Lorazepam) Calculate Ideal Weight for Infants Accident and Trauma Care Iron Intake Calculator The Essence of Yoga Post-Nasal Drip Drug Interaction Checker
This site uses cookies to deliver our services.By using our site, you acknowledge that you have read and understand our Cookie Policy, Privacy Policy, and our Terms of Use  Ok, Got it. Close
×