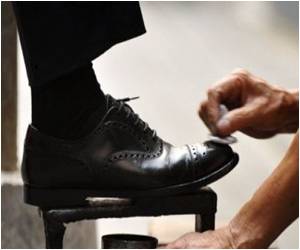 A new study has revealed that it takes just 34 minutes for a new pair of shoes to start pinching.

Researchers have found that the average woman can stand their new pair of shoes for just 34 minutes before grimacing with pain.

They also found that once they have stepped out of the taxi and into a pub or club, they survive just over half an hour before their feet start to hurt.


Four in ten said they take a spare pair of pumps 'out of habit' to change into because they know their shoes will rub.

And more than half have ended up walking home bare-foot, while one in ten have abandoned their shoes altogether or borrowed someone else's.

But a survey of 4,000 women revealed a determined one fifth said the prospect of aching feet would not put them off wearing a pair of killer heels.

"So many women will be able to relate to these findings, as they've been victims of painful shoes, but persevere with them in the name of fashion," the Telegraph quoted Erika Gibbins, podiatrist for shoe insert Insolia, as saying.

"It's ridiculous that so many nights out are spoilt so quickly by painful shoes and it doesn't have to be this way.

"The fact the nation's women are resorting to taking a second pair of shoes, and walking home barefoot means they need to do something so they can get to enjoy nights out and not worry about their feet," Gibbins added.

The study was conducted to mark the launch of Insolia inserts, which claim to relieve the pain of high heels so women can wear them for up to three times longer.