The Temple to Italian Cuisine 'Eataly' Opens in New York 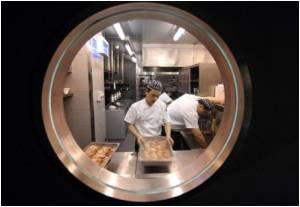 From mozzarella made on the premises to a cooking school, bookstore and seven restaurants, the sprawling "Eataly" food emporium opened its doors here this week to spread its basic message: "eat healthy."

Located at the corner of Fifth Avenue and Broadway, at 23rd Street, the huge 5,000 square meter (54,000 square feet) Italian food and wine market is part of the international "slow food" movement, with branches all over Italy and in Japan.


First opened in Turin, Italy, in 2007, the original Eataly is now visited by hundreds of thousands of customers each year.


The New York store is the brainchild of "Eataly" founder Oscar Farinetti, famous US chef Mario Batali and his partner Joseph Bastianich.

On opening day Tuesday, dozens of vendors busied themselves amid tantalizing, monumental decorations of hams, cheeses and pyramids of sourdough bread.

"We've got 700 brands from 350 wine producers. It's a veritable voyage across Italy's wine landscape with an emphasis on organic wines, in the 'slow food' tradition," he added.

Most of the products for sale are imported directly from Italy, like its mozzarella di bufala (made from water buffalo milk), delivered by plane, canned tomato, sausages and even the mineral water.

And a respect for seasonal variations are at the heart of Eataly's gastronomic philosophy.

The bakery offers "the same bread the Romans eat, made with sourdough not brewer's yeast," said master baker Alessandro Alessandri. "Even in Italy, the only place they eat sourdough bread is in Naples. Nobody makes it any more."