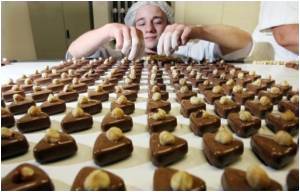 Mohammad Shafiur Rahman of the Department of Food Science and Nutrition has initiated the project to develop the 'healthy-halwa'.

Long renowned for pioneering extreme sports such as bungee-jumping and heli-skiing, New Zealanders are now pushing culinary boundaries by serving up shots of horse semen to iron-stomached food lovers.
Advertisement

"Considering the type and amount of fat and sugar content is used for making Omani halwa, it could be categorised as an unhealthy food, especially if consumed in high quantities," Gulf News quoted him as saying.he team said that the healthy halwa could be developed with reduced input of fat and sugar, and the addition of other compounds considerd beneficial to health.


Halwa is a traditional candy in Oman, and is consumed on a day-to-day basis, or during formal social occasions. It is usually served in Omani homes before drinking Arabic coffee.

Following a plea by legendary James Bond actor Roger Moore famous British department store Harvey Nichols promised to take foie gras from its restaurant menus.
Advertisement
Halwa is mainly made up of starch, sugar, water, ghee, and aromatised with saffron, nuts and/or rose water. Omani halwa is usually made with sugar (50 per cent), water (25 per cent), mill flour (10 per cent) and ghee (15 per cent).

"Five types of consumer groups were identified through hierarchical cluster analysis and the preferred key attributes were explored for each group," said Rahman.

As Good As Ever: Filipino Pork Delicacy Unaffected By Flu Scares

While it might seem the deadly flu outbreak is capable of reaching every corner of the world, it has singularly failed to put the Philippines off its favourite dish of lechon , slowly roasted pig.
Advertisement
<< Justin Beiber's Abortion Comments May Have a 'Positive' Imp...
Water Resource Management Has Direct Impact on Our Health >>