The Pink Dollar Being Eyed by Global Tourist Industry 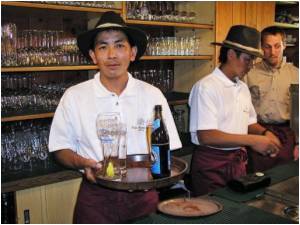 As more countries allow gay marriage, travel operators trying to shrug off hard times are waking up to the vast potential of gay and lesbian tourism, including the new and burgeoning market for same-sex weddings and honeymoons.

But industry experts warn that any businesses eyeing the pink dollar, euro, pound or yen need to be welcoming to gays while also avoiding the cliches associated with the community if they want to be taken seriously.

"The tourism industry is really opening its eyes and realising that this is a new and emerging market that they need to tap into," said Clark Massad, the European representative of the International Gay and Lesbian Travel Association (IGLTA).


"Several years ago, it was considered a niche market and now it is really being considered a segment in and of itself," he told AFP at the FITUR tourism trade fair in Madrid, one of the world's largest.

Medical Tourism has become a serious enterprise in India over the last two years. However some hospitals have been practicing it for quite a few years.
Advertisement
As proof, the IGLTA, which has some 2,200 business members in 87 countries, on Wednesday officially became an affiliate member of the UN World Tourism Organisation in a ceremony at FITUR's new Pink Corner for the LGBT (Lesbian, Gay, Bisexual and Transgender) community.

"The economic impact of the LGBT traveler has become apparent in the last year and especially with the economic crisis," said Massad.

As most are not parents, they have more disposable income, and have the added bonus that they can travel outside peak holiday periods.

Ian Johnson, the founder and chief executive of Out Now, which develops marketing strategies for targeting the gay and lesbian community, said studies by his organisation have shown that LGBT travelers account for 6.0 percent of all tourism numbers worldwide.

But he warned this also represents a challenge as hotels and travel destinations must ensure that employees are properly trained to make gay guests feel comfortable.

"If the consumer senses that it's nothing more than a quick 'pink dollar grab' then the cynicism will kick in immediately and those hotels, airlines and destinations will find they will not get the returns on their investments."

His organisation three years ago developed the GayComfort seal of approval, which has now been awarded to around 1,000 locations worldwide.

Destination tourism marketing offices in places such as Berlin, Stockholm, Australia's Gold Coast, Helsinki, Tel Aviv and Buenos Aires are among the members of the GayComfort programme.

"It is not about making gay guests feel any different, it is all about making them feel welcome, the same as all other guests," Johnson said.

Massad agreed that travel operators and destinations must study the market carefully.

"That means not just hanging a rainbow flag outside of your business ... The last thing you want is to fall into a situation of just using cliches, because the LGBT market will see right through that immediately."

He emphasised that "the LGBT market is an extremely diverse market," with travelers seeking everything from nightlife to beaches to cultural activities.

"Everybody wants to pigeon-hole certain gay destinations but I think that's a very dangerous thing because any city that is a major tourism destination today has the possibility to attract the gay traveler."

Then "government authorities take notice and usually the tourism office money tends to follow the success of one or two pioneering private tour operators in opening up these markets."

Some operators are also widening the field to include weddings and honeymoons.

Johnson said Out Now has been working with the Vienna tourism board to help develop gay honeymoons."

The value is immense and we can only say to you it's growing," although there is still a "distinct lack of awareness" of the potential among operators, he said.

The rising numbers of gay parents, an issue highlighted recently by pop superstar Elton John and his partner, is attracting interest in gay family holidays.

"We have seen some announcements lately from countries that in the past would probably have not been able or willing to have come out so clearly and say 'we are encouraging'" gay tourists, he told AFP.

"So I think it's a trend that is most likely to continue because it is connected to other global trends that are going in that direction."

Diaphragmatic Hernia Blood - Sugar Chart Blood Pressure Calculator Color Blindness Calculator Loram (2 mg) (Lorazepam) Post-Nasal Drip Turmeric Powder - Health Benefits, Uses & Side Effects Find a Doctor Iron Intake Calculator The Essence of Yoga
This site uses cookies to deliver our services. By using our site, you acknowledge that you have read and understand our Cookie Policy, Privacy Policy, and our Terms of Use