For tiny Aiyana and her family, there has never been more reason to celebrate Thanksgiving Day.

An year ago , 2 month-old Aiyana was being taken to her GP almost daily, by her mother Promeese Mills-Lucas, 26. She was suffering from some stomach problems that refused to go away with the usual laxatives, karo syrup, prune juice etc. One particular day, her doctor checked her heart and then promptly ordered for oxygen and a transfer to Children's Hospital at Richmond.

Aiyana was diagnosed with an anomalous left coronary artery. This is a rare defect that occurs when the heart muscle does not get enough oxygen to pump correctly. Without surgery, the tiny baby could succumb to a heart attack.


Last November, Aiyana underwent an open-heart surgery . Still, doctors were not able to fix the problem. On New Year's Eve, she was admitted to the hospital, where doctors told Mills-Lucas and her husband, Kevin Lucas, 27, that their baby was having a slow heart attack and could die without a transplant.

"Every day brought something new," recounts Mills-Lucas. "One day Aiyana is OK, the next day they are bringing her back to life, the next she is playing, another day her temperature is 115 degrees and she is lying on ice. Aiyana is my first and only child, and this has been hard on me."

On June 1, the day Aiyana turned 9 months old, she received a new heart. The estimated eight-hour surgery took only four hours, and a month later she went home. Meanwhile Mills-Lucas moved to Florida from Virginia to live with her parents, who had relocated from Seattle, while her husband worked two jobs to support the family.

Now 14 months old and healthy, Aiyana boarded a cross-country flight to visit her mother's hometown and spend Thanksgiving with family who have only heard about her ordeal and recovery.

"I cried yesterday just thinking about how this was a blessing in disguise," says George Davis, Aiyana's grandfather. "I was there when all of the tubes were in her and things weren't looking so good. God told us to hold on and everything would be all right, and it is."

Nearly a dozen family members cooked all Thanksgiving Day, played family games and put one another on the spot with an impromptu "Soul Train" dance line.

"We take having an ordinary life for granted, and having Aiyana here is an extraordinary event," Janet Stephens says about her young niece. "Having her come here this soon was the ultimate design."

Aiyana still needs a feeding tube, but is slowly being weaned from it. The tiny tot now eats most solid foods, including her favorite, cooked carrots.

"She is my miracle baby that I am going to tell the world about," Mills-Lucas says.

"Being in the hospital for so long watching some babies go home and worse cases come in was more than just an experience -- it was a testimony for me. If I were to get caught up in my own emotions, who would have been strong for Aiyana?"

Government Shows A Heart - Efforts To Help Poor Children With Heart Defects On
Taking a big stride, the Tamil Nadu Government has decided to join hands with leading private hospitals to provide treatment and surgeries to children with congenital heart diseases.
READ MORE 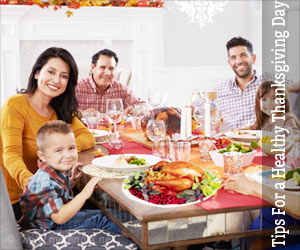 Tips to Stay Fit and Healthy This Thanksgiving Day
Have a healthier Thanksgiving Day by following these simple tips to avoid holiday weight gain and enjoy the traditional feast with loved ones.
READ MORE