The Japanese Art of Cherry Blossom Viewing Comes To Washington 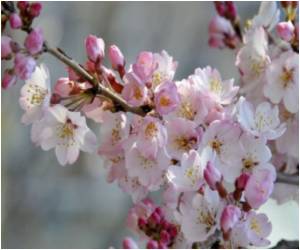 Washington is in eager anticipation of its annual cherry blossom celebration marking the start of spring, with 3,000 Japanese cherry trees about to burst into full bloom.

Thousands of visitors are expected to attend the National Cherry Blossom Festival, cramming the narrow walkways of Washington's Tidal Basin for a peek at the famed pink flowers.

One of those spectators is Japanese diplomat Yoshiyuki Yamada, a new arrival to the US capital who is marking his first American cherry blossom celebration with his wife Akiko and their toddler daughter Haruno.


Yamada, a Kyoto native who arrived here six months ago, describes the Japanese ritual of finding and staking one's claim to the perfect spot for viewing the blossoms -- and one essential item is a plastic tablecloth.
Advertisement
"It's a very important piece of the process," said Yamada.

"Without (the tablecloth), it's very difficult to (hold a) place, to spend time on the ground," he explained.

"It's very crowded, so it's very important for us to take the place," he said.

Unlike in Washington, the celebration in his homeland -- referred to as "hanami" in Japanese -- can sometimes involve leaving the office and heading to a nearby park with one's work colleagues, the diplomat noted.

"Usually we send some junior staff or trainees... to hold a spot. And they have to stay there and wait for us," he said.

"It's not strange, because everybody is doing that, especially if it's a very big and famous park."

It's also essential to be flexible. The blooms can come into flower in Japan any time from late March to early May, depending on the region of the country and the weather.

Washington's prized cherry trees were a gift to America from Japan in 1912 as a symbol of friendship. They were planted along the banks of the Tidal Basin, a man-made reservoir in the heart of the city.

As in Japan, the cherry blossoms are one of the most visible symbols here of seasonal rebirth -- a sign that the long, dark winter is finally over.

In Japan, "the cherry blossom blooming is a symbol of changing seasons," Yamada said, noting that the academic and financial years start in mid-April in Japan.

"For a lot of people it's a period of graduation from school, entrance into a company, starting a new life, so we're using this period to get together with our own families."

Yamada added that unlike in Washington, where public drinking is forbidden, imbibing is an important part of the festivities in Japan.

"We bring something to eat and drink -- beer, Japanese sake, wine. Basically we don't have any rules or laws that prohibit drinking outside," he said.

His wife Akiko adds that it's also important to bring along the right picnic items.

"We prepare a 'bento' box to share, with rice balls, some chicken, vegetables and fruit," she said.

In Washington this year, the blooms are a little later than usual due to an unusual cold spell, but are expected to burst into flower at any time.

Gregory O'Dell, president of DC Events, which organizes Washington's cherry blossom festivities, said the celebration brings in more than $100 million to the city.

The month-long festival includes an array of cultural events, concerts, art exhibits and, as its highlight, the famous Cherry Blossom Parade. The short-lived blooms are open here for only about a week.

After that, pale petals will cascade like snowflakes onto the heads of visitors, marking an end to cherry blossom viewing for another year.

Proceeds Of the US Cherry Blossom Festival To Aid Japan After Its Triple Disaster
Proceeds from Washington's famed Cherry Blossom festival, a highlight of the capital's cultural ......