About a hundred houses float on a lake in the Amsterdam neighbourhood of Ijburg --a testament to how the Dutch are trying to turn their traditional enemy, water, into an ally against overcrowding.

"There is a lot of water in the Netherlands, it is used for navigation and recreation. We want to see if it can also be inhabited," Ton van Namen, director of real estate company Monteflore, told AFP. 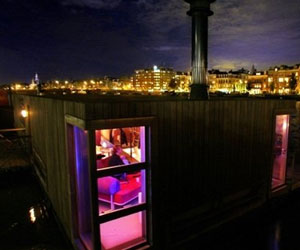 A mother watches television inside her floating house, or houseboat, along the inner waters of the Amsterdam canal 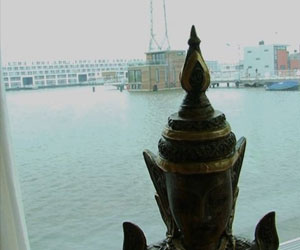 Monteflore built more than half the floating homes off the western shore of the Ijmeer lake, a dozen kilometres from the Amsterdam city centre.


The homes are cubic, with walls of plastic and untreated wood in neutral colours, built entirely with non-polluting materials. They take a few months to construct.
Advertisement
The first inhabitants of Ijburg's floating houses arrived in 2008.

"We are in the experimental phase, but this may be the beginning of the solution to residential overcrowding," said Igor Roovers, director of a grouping created by the Amsterdam city council to manage the Ijburg development -- the biggest of its kind in Europe.

The Netherlands, with 16.5 million inhabitants, is the second most densely populated country in Europe with 400 people per square kilometre (0.4 square mile).

Roovers believes floating homes may also provide the solution to another growing problem: the risk of residential flooding from rising sea levels caused by global warming.

Nine million people in the Netherlands live in inland areas directly sheltered from the sea and rivers by dykes and dunes, and 65 percent of the national production capacity lies in flood-prone areas.

The Ijburg houses rest on floating, concrete bases fixed to two solidly planted pillars to keep them stable, all the while allowing them to adjust to the water level.

They are linked to dry land by wharfs, through which they receive gas, electricity and running water.

"To live in this house gives me a sense of freedom. I have the feeling of being permanently on holiday," 43-year-old pilot Rik Uijlenhoet said of his 175 square-metre (218 square-yard) dwelling, its large windows looking out on a vast expanse of greyish lake water.

"One doesn't realise that one is on the water: you only really notice it when you see the chandelier in the lounge sway slightly," he said, adding that the biggest difference between his home and a more traditional one was that "the water is my garden".

"It is useful to know how to swim," added van Namen.

Uijlenhoet, who lives on the water with his wife and three children, said it would have been "practically impossible" to build a house of a similar size on dry ground: "the price of land is much higher than that for a parcel of water."

The price Uijlenhoet paid included 130,000 euros for a leasehold on a 160-square-metre patch of water on the Ijmeer, renewable with the city council every 50 years.

Eventually, the Ijburg development will have about 170 floating houses surrounded by 18,000 new lodgings being built on artificial islands.

The Ijmeer lake and the bordering Markermeer have a combined 68,508 hectare (169,000-acre) surface, which could potentially hold thousands more floating homes, said Roovers. But current technology did not yet make this possible.

"If we float too many houses here, the sunlight will no longer be able to reach the water and the water life will disappear. Dead water gives off a terrible smell," he said.

"We have not yet been able to find a long-term solution to that."

Other Dutch municipalities, like Almere on a river just east of the Ijmeer, and Leeuwarden, in the north, have also launched experimental floating house projects.

Advertisement
<< Hotel Guests Not As 'Green' As They Proclaim They Are
Care Groups and Parents Enter Their Children's Murky Digita... >>