The Duchess of Cambridge Nervous About Baby Birth 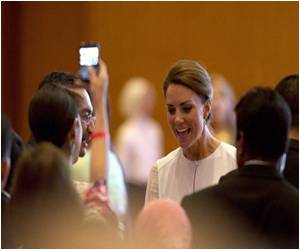 Duchess Kate has admitted that she is nervous about giving birth while she showed off her baby bump for the first time on official duties.

Tanned and looking relaxed after a holiday on the Caribbean island of Mustique, Kate confided in a recovering alcoholic as she visited a treatment centre for female addicts, the Daily Express reported.

As the 31-year-old Duchess joined an art therapy class with the women at Hope House in Clapham, south London, one asked her if she was nervous about having a child.


Lisa, a 34-year-old mother-of-three, who didn't give her full name, added: "She said it would be unnatural if she wasn't."

The visit was only the Duchess's second public engagement this year.

She was in hospital with severe morning sickness after her pregnancy was announced last December.

Now, clearly much better, she was happy to show off her baby bump in a 300-pound MaxMara Studio wrap dress.

Source: ANI
Advertisement
<< The World's Most Expensive Cup of Starbucks Coffee
Smoking Rock Found in China That can Inhale Cigarette in 5 ... >>

Most Nerve-wracking Moment of Duchess Kate's Life
In Wales, when the Duchess of Cambridge took a home pregnancy test in her three-bedroom cottage, it ...

After Recovering from Severe Pregnancy Sickness Duchess Kate's Condition Deteriorates
It has been revealed that the Duchess of Cambridge has suffered a setback in her recovery from ......

Palace Confirms That Duchess Kate Pregnant
After Kate was admitted to hospital with a rare form of severe morning sickness the Duke and ......