The Cat That PURRS 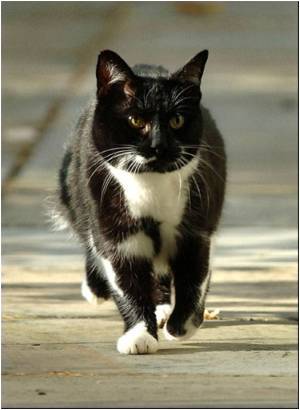 Smokey, a 12-year-old British Shorthair cat, not only soothes her owners, Ruth and Mark Adams with her purr, but simply amazes them.

While most cats' purring registers around 25 decibels, Smokey produces a sound that reaches 92 decibels, the level of a landing Boeing 737.

Meet Chaser - the Dog Whose Vocabulary Is Over 1000 Words!

Ever wonder if your pet dog can understand what you are saying? Well chances are it might, and to prove it, is a pet border collie that can understand more than 1000 words.
Advertisement

Her owners, the Adams, say that her 'cooing' purr, as they describe it, can even drown out TV and radio shows and phone conversations. 'She even manages to purr while she eats. The only time she is quiet is when she is asleep. It's either adorable or annoying, depending on what mood you're in. You don't even have to stroke her to start a purring session. Often she'll do it for no reason.'


Northampton Cats Protection's representative Diana Johnson who has recruited Smokey as an honorary volunteer to raise awareness of the important cat welfare work the organization does, remarks, 'It is very unusual and I've never found a cat with a purr that is anywhere near as loud.'

Smokey might well purr her way into the Guinness World Records soon.

Animals that process information using a preferred hemisphere of the brain fare better those who use both sides of their brain simultaneously, a new study has said.
Advertisement
<< Epilepsy And Low Socio-Economic Status: A Deadly Combinatio...
Blood Vessel Lining Could Indicate Heart Disease Risk >>

When you count calories that you consume everyday, why not do the same for your pet, a study asks
Advertisement
News A-Z
A B C D E F G H I J K L M N O P Q R S T U V W X Y Z
What's New on Medindia

Anemia among Indian Women and Children Remains a Cause of Concern- National Family Health Survey-5
View all
News Archive
News Resource
News Category
Milestone In Voluntary Blood Donation Achieved Samsung Reinvents Toilet for the Poor Which is a Better Form of Exercise: Daily or Weekly? First Phase of Foot-and-Mouth Disease Vaccination Shocking News: Polio Cases Return After a Decade in the US
More News
Sign up for Wellness Consult a Doctor Sign up for Selfcare