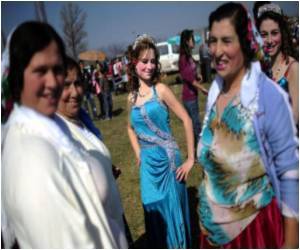 The market day in a tiny village in central Bulgaria was unusual because fruits and vegetable shops were no where to be seen instead young eligible bachelors from Roma community were there to find a suitable life partner at a traditional "bride market".

More than 2,000 Roma travellers converged on Mogila on one of the first sunny weekends of spring, the air abuzz with conversation by men, women and children decked out in their finest clothes for one of the year's social highlights.

The "bride market" -- held four times a year on religious holidays during the spring and summer -- is a chance for the nomadic tinkers to meet, catch up on gossip and notably play matchmaker for adolescent sons and daughters.


Theirs is a deeply Christian orthodox and rigidly patriarchal society where young people are only allowed to marry within the group.

Teenage girls are strictly segregated from boys, with many even taken out of school at age 11 or 12 so there is no chance they could "bring disgrace" on their family.

There is a general belief that a pregnant woman should eat for two people. How far is this true? This compilation of information, presented in the quiz, will tell you more.
Advertisement
So, for adolescents of both sexes the "bride market" is a rare occasion to have fun and flirt like normal teenagers.

The custom may raise eyebrows among women's rights groups, given concerns about forced marriage and underage pregnancy.

Research on the custom is scarce, and the tinkers themselves are suspicious of outsiders and reluctant to talk about the money that changes hands or reveal the exact ages of the girls involved.

One of the few who has studied the bride markets for several years is Alexey Pamporov, an expert in demographics and sociology at the Open Society Institute in Sofia -- a branch of philanthropist George Soros' non-governmental organisation focussed on improving conditions of marginalised communities. He insists they have nothing to do with forced marriages or selling under-age girls for sex, precisely because the tinkers are such a close-knit and deeply religious community.

"We can't speak of forced marriages. The girls are not abused in any way and their consent is required in 100 percent of the cases," Pamporov said.

He concedes that underage marriages may have been common in the past, but says they are much rarer nowadays. And money received for a bride plays more a symbolic role as a sort of dowry, proving that the young man would be able to provide for his future family, he added.

"You, too, would want to know if your husband-to-be has an apartment, a car, and a stable job before you marry," he said.

Pamporov suggested that reservations about the bride markets tend to be coloured by deep-seated prejudice against the 700,000-member Roma minority in Bulgaria, who suffer discrimination and often live in isolation and poverty with a high rate of illiteracy.

The girls themselves say they have no problem with the custom

"Of course I want to get married," said Yanka, a pretty 15-year-old from the nearby village of Bolyarovo who has put on her finest -- a burgundy satin dress, candy pink lipstick and blue mascara -- especially for "the market".

It's only March and there is still a touch of frost in the air, but this hasn't deterred sisters Kalinka and Galina from the village of Krivo Pole from turning up in skimpy golden sandals.

"Beauty requires sacrifice. Our task today is to shine!" they chirped as -- under the watchful eye of their father Lazar -- they shoot playful looks at young men hovering shyly nearby.

"That is my price and I will not give them away in marriage without money," he said unsmilingly.

The bride markets do have their critics, however, even within the Roma community.

"I strongly condemn it. The women are treated like some sort of commodity," said Hristo Nikolov, a Roma activist who pointed out the custom was peculiar to the tinkers and not practised by other sub-groups within the Roma community.

Nevertheless, Pamporov countered that illiteracy, underage marriages, teenage pregnancies and high child mortality were much bigger problems among the Roma who live in ghettoes than among the travellers, like those at the "bride market".

For the girls, however, it's all a bit of harmless fun.

Donka, a very modern-looking 22-year-old in jeans and T-shirt and her 19-year-old sister Mariyka insisted they felt no pressure from their parents.

"My parents are not pushing me in any way," said Donka, while Mariyka dismissed the issue of the money as an old-fashioned "gypsy custom".

"I don?t like the money bit, but that's the way of my parents' generation are," she said.

Official statistics have revealed that Romanian women went through over 22 million abortions as a result of policies introduced by former communist dictator Nicolae Ceausescu.
Advertisement
Advertisement
This site uses cookies to deliver our services.By using our site, you acknowledge that you have read and understand our Cookie Policy, Privacy Policy, and our Terms of Use  Ok, Got it. Close
×