The Beard Maketh the Man: New Book Explains What Beard and What Man 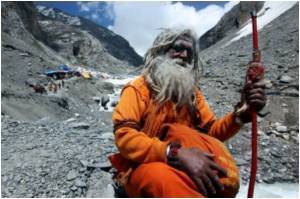 With an all-new book revealing the personalities hiding behind facial hair, we're wondering how the author would describe the beard in this picture?

'Beards... A Spotter's Guide' by Cara Frost-Sharratt, names no fewer than 40 styles, and it explains how each has a meaning all of its own.

Bosses in a Japanese city have come to the defence of their decision to ban beards at work places by saying they are being environmentally friendly.
Advertisement

A look at some showed how the Hollywoodian, which is a favourite of actors, is usually sported by one doing mostly ads and pub theatre, the Sun reported. The Chin Strap is something worn by wannabe DJs and cowboy landlords, the Goatee by people who probably sorts mails or collects empty glasses.


People who insist they are budding songwriters or novelists favour the Circle Beard, but they usually end up cleaning windows even after five years.

The extravagant beards and moustaches proudly sported by generations of Indian men are under threat, according to a new book that celebrates the country's finest facial hair.
Advertisement
The person sporting a Ducktail is seen as an eccentric quiz regular or scout leader, but who in reality can be a closet bigot and shady dealer.

The Garibaldi looks like a hippy type, or a gardener with hygiene issues, but it could also be the full facial hair is being used as a cover up for lack of looks.

The book has been published by Octopus Books and is priced at 7.99 pounds.

Barbers Warned Against Shaving Beards  It's Against Islam!

A militant organisation Lashkar-i-Islam in Bara subdivision of Khyber Agency, Pakistan has warned barbers against shaving beards. Men have to grow beards and women have to wear the veil.
Advertisement
Advertisement
This site uses cookies to deliver our services.By using our site, you acknowledge that you have read and understand our Cookie Policy, Privacy Policy, and our Terms of Use  Ok, Got it. Close
×