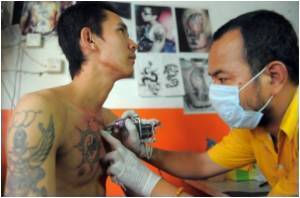 Tattoo artists are quite a sought after lot, but a recent study has pointed out that present day designs may not have much appeal as the human canvases age.

Tattooed celebrity trailblazers as diverse as David Beckham, Angelina Jolie and British "first lady" Samantha Cameron have helped bring body art into mainstream culture, but will they be regretting their choice as the years pass?

Ian Eames, a researcher in fluid mechanics at University College London, has created a mathematical model which can be used to predict the movement of tattoo ink particles over time, and give an idea of which designs age better.


"Tattoos are incredibly popular worldwide with more than a third of 18-25 year olds in the US sporting at least one design," said Eames.

The paper, which is published in the Mathematics Today journal, will enable those considering getting a tattoo to accurately predict how their design will look in 20 years' time.

Girish Giridhara's arms are tattooed with Hindu gods, goddesses and sacred mantras. The spiritual designs are intricate but also hardly surprising for a man who once trained to be
Advertisement
Eames said the study would "pave the way towards assessing whether there are any long-term health implications" and provide "an idea of how their chosen design could look several years down the line".

Tattoo inks are a suspension of water-insoluble particles, such as mercury, lead, cadmium and iron, which are injected under the skin using a needle.

Over time, these inks become dispersed as the cells which contain them die, divide or leave the body.

"Skin type, age, size, exposure to the sunlight and the type of ink which is used all influence how a tattoo disperses with time," explained Eames.

"Broadly speaking... the small details in a tattoo are lost first, with thicker lines being less affected.

"Although finely detailed tattoos might look good when they are first done, they tend to lose their definition after 15 years," he added.

Ma Htwe recalled the day of agony she suffered, more than five decades ago, when her face was etched with the intricate tattoo that still lines her papery skin like a spider's web.
Advertisement
Advertisement