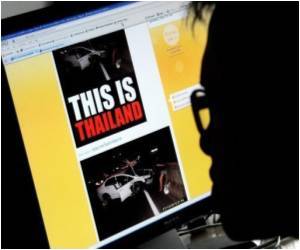 Several volunteers are recruited by the Thai justice ministry to web the internet pages in search of anybody violating the kingdom's strict lese majeste rules -- an offence punishable by up to 15 years in prison.

"My inspiration to be a cyber scout is the king. There are many ways to protect the institute, and this is one of them," Thattharit, a 39-year-old administrative worker at a school in Bangkok, told AFP.

"Sometimes there are just fun conversations among teenagers and they think it's not important, but for those who love the royal institute, some comments that I see are not appropriate. I must report them to the authorities."


A boom in online discussion on social media websites such as Facebook and Twitter is fuelling political debate and challenging Thailand's long-standing taboo against openly discussing the royal family.

The day of reckoning has come for cyber-bullies in Reading, as the Thames Valley Police along with teenage volunteers start to identify them on Facebook.
Advertisement
According to a recent study by Freedom House, a US-based group campaigning for democracy and human rights, this shift "has provoked greater efforts by the government to control the free flow of information and commentary online.

"Ironically, the large-scale blocking of websites critical of the royal family has further deepened the politicisation of the monarchy in the eyes of many Thais, while the increased content restrictions and legal harassment have contributed to greater self-censorship in online discussions," it added.

The costs are high for Internet users or website editors who fall foul of the law.

In March a webmaster was jailed for 13 years after the Internet site he ran -- linked to the opposition movement -- allegedly published comments insulting the monarchy.

Another website editor is facing up to 70 years in prison for failing to remove reader comments about the Thai monarchy quickly enough.

Anyone can make an accusation of insulting the monarchy and the police are duty-bound to investigate.

The monarchy is a very sensitive topic in politically turbulent Thailand. King Bhumibol Adulyadej, the world's longest-reigning monarch and revered as a demi-god by many Thais, has been hospitalised since September 2009.

The 83-year-old has no official political role but is seen as a unifying figure in a country that has been frequently riven by political violence, particularly since a military coup in 2006.

Thailand has seen an explosion in the popularity of social networking sites, fuelled by fierce debate over a political crisis that erupted into deadly opposition protests in Bangkok last year which left 90 people dead.

In recent years the Thai government has removed tens of thousands of web pages from the Internet for allegedly insulting the monarchy, and the cyber scout initiative is the latest attempt to monitor online debate.

"I believe this project has a political motivation because this government sees the Internet as a threat. That's why it is trying to control it," said Supinya Klangnarong, a web freedom activist with the Thai Netizen Network.

"The authorities shut down websites and arrested people who posted messages that threatened state security or the monarchy but they couldn't block them all and it also affected Thailand's human rights image," she said.

"So they had to find a new way of controlling information by coming up with this project."

According to the project's website www.justice-cyberscout.org, volunteers "will have a duty to monitor information and actions dangerous to the country's security and will protect, defend and hold the royal institute in esteem."

Thattharit attended one day of training to become a cyber scout.

"I learned about the history of the king, his majesty, and how divine he is ... and also how to use a computer, the Internet and Facebook," he said.

The project is in its infancy and so far Thattharit has not reported anybody to the authorities.

He explained that if he finds comments deemed offensive to the king he plans to contact the person who posted them to first to warn them and give them a chance to change their views, before informing officials.

"Not many people know about the project. They may think they're talking to a friend because I don't tell them I'm a cyber scout," he said.

"I feel I am doing an important job. I can give back to the country."