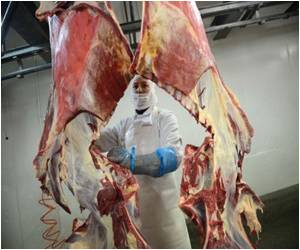 The European Union has approved the launch of tests for horse DNA in meat products, seeking to end the horsemeat scandal spreading across Europe.

The test programme will also look for the presence of phenylbutazone, an anti-inflammatory treatment for horses which is harmful to humans and by law supposed to be kept out of the food chain.

The crisis continued to build Friday as Austria and Norway confirmed that ready-to-eat "beef" meals containing horsemeat had been found, stoking concerns many more cases in more countries will come to light after falsely-labelled meat was found in Britain, France, Germany and Switzerland.


The scandal has left governments scrambling to figure out how and where the mislabelling happened in the sprawling chain of production spanning a maze of abattoirs and meat suppliers across Europe.
Advertisement
In Britain, the Food Standards Agency said that 29 out of 2,501 beef products it has tested so far have been found to contain more than one percent horsemeat but stressed that these must be considered exceptions.

"The overwhelming majority of beef products in this country do not contain horse. The examples we have had are totally unacceptable but they are the exceptions," FSA chief executive Catherine Brown said.

Brown added that the results were "still far from the full picture" and that testing continued.

French meat-processing firm Spanghero, blamed by Paris for the growing scandal, insisted again it was not responsible. "I don't know who is behind this but it is not us," Spanghero boss Barthelemy Aguerre told Europe 1 radio.

The French government on Thursday charged that Spanghero knowingly sold 750 tonnes of horsemeat mislabelled as beef over a period of six months, 500 tonnes of which were sent to French firm Comigel, which makes frozen meals at its Tavola subsidiary in Luxembourg.

That meat was used to make 4.5 million products that were sold by Comigel to 28 different companies in 13 European countries.

Danish authorities said Friday they were probing whether a slaughterhouse may have mixed horsemeat into meat marked as beef that was supplied to pizza makers.

Meanwhile Dutch officials raided a meat processing plant in the south of the Netherlands believed to be mixing horsemeat and beef and selling it on as pure beef, the public prosecutor said.

Under the measures agreed in Brussels, EU officials and statements said the testing of "foods destined for the final consumer and marketed as containing beef" could start immediately in member states, with the European Commission paying 75 percent of the costs for the first month.

The DNA controls, "mainly at the retail level", will include 2,250 samples across the EU, ranging from 10 to 150 tests per member state.

The phenylbutazone test will require one sample for every 50 tonnes of horsemeat, with each of the bloc's 27 states required to carry out a minimum of five tests.

EU Health Commissioner Tonio Borg, who proposed the plan at crisis talks on Wednesday, said he welcomed its swift approval and urged member states to keep up the momentum.

"I call on them to keep up the pressure in their efforts to identify a clear picture and a sequence of events," he said in a statement.

"Consumers expect the EU, national authorities and all those involved in the food chain to give them all the reassurance needed as regards what they have on their plates."

The test results will be reported to the European Commission by April 15 which will collate them in the EU's Rapid Alert System for Food and Feed (RASFF) so that they can be immediately used by member states.

Horsemeat Raids Launched in Britain as Scandal Spreads
British police raided two meat plants in the first such operation searching for the source of ......

Frozen Ready-to-eat Beef is Actually Horsemeat, France Confirms
After a scandal that horsemeat was disguised as beef, France became the second European country ......