Testicular Cancer Partners With Autoimmune Disease to Cause Maximum Damage 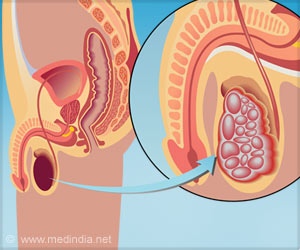 An example of a biospecimen that contains a pattern researchers have dubbed "sparkling" because of how the sample looks under a microscope. Over time, researchers noticed that the clinical stories of the patients with these samples were the same: they had ataxia and testicular cancer.

Advertisement
‘The autoimmune disease begins with a noticeable testicular tumor, which mostly causes the immune system to attack the brain, thus resulting in different life-disrupting outcomes like losing the use of limb or speech.’
Read More..


Called "testicular cancer-associated paraneoplastic encephalitis," the disease causes severe neurological symptoms in men. They progressively lose control of their limbs, eye movements, and, in some cases, speech. The disease begins with a testicular tumor, which appears to cause the immune system to attack the brain. Affected men often find themselves misdiagnosed or undiagnosed and appropriate treatment is delayed.
Advertisement
In a study published in The New England Journal of Medicine, the scientists identified a highly specific and unique biomarker for the disease by using a variation of "programmable phage display" technology. Their refined version of this technology simultaneously screens more than 700,000 autoantibody targets across all human proteins.

Using this powerful tool, the UCSF researchers evaluated cerebrospinal fluid from a 37-year-old man who had a history of testicular cancer and debilitating neurological symptoms, including vertigo, imbalance, and slurred speech. The enhanced phage technology identified autoantibodies targeting Kelch-like protein 11 (KLHL11), which is found in the testes and parts of the brain.

These results were correlated and validated with additional patient samples from the Mayo Clinic. In addition to identifying the cause of this mysterious neurological disease, the results point the way to using this protein biomarker as a diagnostic test for men with testicular cancer-associated paraneoplastic encephalitis

Testicular Cancer
A person with testicular cancer may have a testicle that is three times its original size. The most ...

Men With Learning Disabilities More Likely to Develop Testicular Cancer
Men with learning difficulties have a 1 in 10 chance of dying from testicular cancer, compared to a ...