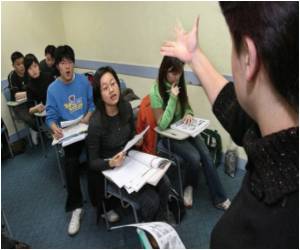 People with higher IQ scores were faster at catching the movement of the bars when observing the smallest image.

The results support prior research showing that individuals with higher IQs make simple perceptual judgments swifter and have faster reflexes. "Being 'quick witted' and 'quick on the draw' generally go hand in hand," says Melnick. But the tables turned when presented with the larger images. The higher a person's IQ, the slower they were at detecting movement.

"From previous research, we expected that all participants would be worse at detecting the movement of large images, but high IQ individuals were much, much worse," says Melnick. That counter-intuitive inability to perceive large moving images is a perceptual marker for the brain's ability to suppress background motion, the authors explain. In most scenarios, background movement is less important than small moving objects in the foreground.


Think about driving in a car, walking down a hall, or even just moving your eyes across the room. The background is constantly in motion. The key discovery in this study is how closely this natural filtering ability is linked to IQ.
Advertisement
The first experiment found a 64 percent correlation between motion suppression and IQ scores, a much stronger relationship than other sensory measures to date. For example, research on the relationship between intelligence and color discrimination, sensitivity to pitch, and reaction times have found only a 20 to 40 percent correlation.

"In our first experiment, the effect for motion was so strong," recalls Tadin, "that I really thought this was a fluke."So the group tried to disprove the findings from the initial 12-participant study conducted while Tadin was at Vanderbilt University working with co-author Sohee Park, a professor of psychology.

They reran the experiment at the University of Rochester on a new cohort of 53 subjects, administering the full IQ test instead of an abbreviated version and the results were even stronger; correlation rose to 71 percent. The authors also tested for other possible explanations for their findings.

Low IQ Linked to Genetic Risk for Schizophrenia
A new study has revealed that low IQ is connected to the risk of developing schizophrenia. ...

Iodine Deficiency During Pregnancy may Lead to Lower IQ Among Kids: Researchers
Mild iodine deficiency during pregnancy could be dimming the intellect of some babies born in the .....