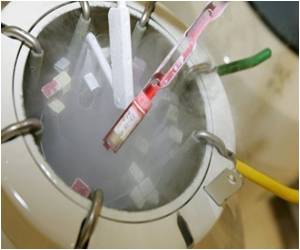 Edwards spent his career making the dream of having a baby come true for millions of people worldwide, running into conflict with the Catholic Church and fellow scientists on his way.

He was awarded the Nobel prize for medicine in 2010, three decades after the birth of the world's first test-tube baby, Louise Brown, in 1978, and five decades after he first began experimenting.


"It is with deep sadness that the family announces that Professor Sir Robert Edwards, Nobel prizewinner, scientist and co-pioneer of IVF, passed away peacefully in his sleep on April 10, 2013 after a long illness," the University of Cambridge said in a statement released Wednesday.
Advertisement
"He will be greatly missed by family, friends and colleagues."

Edwards was too frail to pick up his Nobel prize in Stockholm in 2010, leaving that to his wife Ruth, with whom he had five daughters. However, he remained a fellow of Churchill College at Cambridge until his death.

His work was motivated by his belief, as he once described it, that "the most important thing in life is having a child. Nothing is more special than a child".

Colleagues rushed to pay tribute to him.

"Bob Edwards is one of our greatest scientists," said Mike Macnamee, chief executive of Bourn Hall, the IVF clinic that Edwards founded with Patrick Steptoe, a gynaecological surgeon.

"His inspirational work in the early 1960s led to a breakthrough that has enhanced the lives of millions of people worldwide."

He added: "It was a privilege to work with him and his passing is a great loss to us all."

Born in Yorkshire in northern England on September 27, 1925, into a working-class family, Edwards served in the British army during World War II before returning home to study first agricultural sciences and then animal genetics.

Building on earlier research which showed that egg cells from rabbits could be fertilised in test tubes when sperm was added, Edwards developed the same technique for humans.

In a laboratory in Cambridge, eastern England, in 1968, he first saw life created outside the womb in the form of a human blastocyst, an embryo that has developed for five to six days after fertilisation.

"I'll never forget the day I looked down the microscope and saw something funny in the cultures," Edwards once recalled.

"I looked down the microscope and what I saw was a human blastocyst gazing up at me. I thought: 'We've done it'."

But Edwards and Steptoe, who died in 1988, were forced to defend their work in the face of severe opposition, from the media, the Catholic Church -- and fellow scientists.

At a conference on biomedical ethics in Washington in 1971, the Nobel laureate James Watson, who with Francis Crick had discovered DNA, said IVF research would necessitate infanticide.

Addressing the conference, Edwards defended his work with the passion and energy that characterised all his work, and received a standing ovation.

He remained convinced to the end that the Catholic Church is wrong to object to IVF, saying clergy who condemn the technique are "totally mistaken".

"Catholics are told not to do it and yet Catholics go and do it. All the popes have done for themselves is teach their people to disobey them," he argued.

Such was the controversy surrounding the birth of Louise Brown that her mother had to give birth in secret to avoid the media, but Edwards always spoke of it with great pride.

Celebrating Brown's 30th birthday in 2008, he said: "I think the whole thing is incredible."

"Few biologists have so positively and practically impacted on humankind," said Peter Braude, emeritus professor of obstetrics and gynaecology at Kings College London.

"Bob's boundless energy, his innovative ideas, and his resilience despite the relentless criticism by naysayers, changed the lives of millions of ordinary people who now rejoice in the gift of their own child. He leaves the world a much better place."

Martin Johnson, Professor Of Reproductive Sciences at Cambridge University, pointed out that the "socialist" Edwards had died in the same week as Conservative former prime minister Margaret Thatcher, who passed away on Monday.

"Indeed, I am sure that it is a source of gentle pleasure for him that he outlived Margaret Thatcher -- born in the same year as him -- by 48 hours!"