Temperatures Set to Rise in India Before the Monsoon 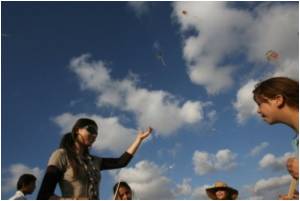 As the temperatures are predicted to rise before the onset of monsoon, people in Uttar Pradesh and Madhya Pradesh are now looking for ways to escape the scorching sun.

As the month of June approaches, heat wave conditions continue to hit normal lives, making it difficult for the people to step out of their houses.

People in Allahabad were seen with their heads covered with scarves and caps and carrying umbrellas as temperatures reached around 42 degrees Celsius at noon on Saturday.

Some residents sought shelter under shade of trees as power cuts across the country remain a major issue in summers, adding to their plight.
Advertisement
"It is very hot and we are facing power cuts too. So, to protect ourselves from heat we have to make different arrangements. We get relief under tree's shade so we come here to sit. It must be 45 degrees," said Gunja, a resident of Allahabad.

As mercury is going northwards many parts of the country are also witnessing hot, dry and dusty spell.

"Pre-monsoon season is on leading to pre-monsoon activity. Heating phenomenon takes place in which local heating occurs due to evaporation, transpiration. Presently, there is no system in the state. Westerly winds are prevailing. In the coming days temperatures can rise by two or three degrees Celsius," said weather scientist at MeT, R.P. Tripathi.

Tripathi also added that due to clouds engulfing the skies every evening, a green-house kind of effect occurs which leads to rise in temperature.

May and June are usually the hottest months of the year in India with temperatures often in the range of 42 to 47 degrees Celsius at many places.