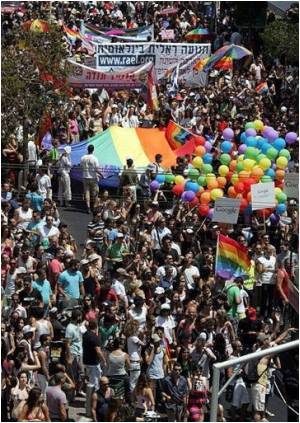 Israel's gay and lesbian community plans to hold its annual Gay Pride parade throughout the coastal city of Tel Aviv this Friday followed by a public wedding of gay couples in a park.

"You are asked to order the cancellation of the gay parade in Tel Aviv," an attorney representing Interior Minister Eli Yishai of the ultra-Orthodox Shas party and the country's chief rabbis wrote in a letter

"We urge you to restrict the event to a closed area to which entry will be limited to people above the age of 18," said the letter, addressed to Netanyahu, Tel Aviv's mayor and Israel's police chief.

Police were also urged to make sure that all those taking part in the event "are dressed and not in possession of objects and toys which have sexual connotations".

"The holding of a parade similar to those held in the past on its current route constitutes a grave insult to the feelings of the public, especially to the Jewish, Christian and Muslim public," the letter said.

Tel Aviv's gay parade has been held for the past nine years with relatively little objections from the country's religious community, unlike similar events in Jerusalem which saw violence and even one stabbing.

The heart of Israel's cultural life and a bastion of secularism, Tel Aviv is considered one of the world's most gay-friendly cities.

"Even in a constitutional democracy sensitive to the freedom of expression, there is no right to allow the consumption of abominations," the minister's letter said.

"Please order the event to be held not in its current location but on the outskirts of the city away from the religious population and minors who could be exposed to this material."

The European gay and lesbian parade Europride is expecting about 50,000 people for its annual festival in the Swiss city of Zurich on Friday and Saturday, but reportedly without Mr Switzerland.

Russia Prevents Lesbians From Getting Married

The Moscow city government on Tuesday blocked an attempt by two lesbians to get married, as Russia's gay activists stepped up efforts to draw attention to homophobia ahead of the Eurovision