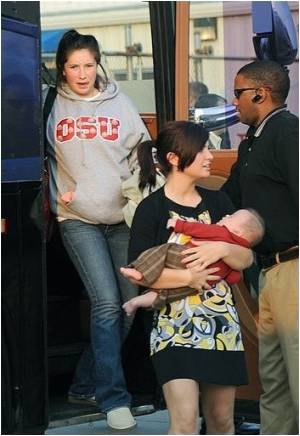 Rate of pregnancies in younger teens aged between 15 and 17 have declined over the past 20 years in the US, but teen births in this age group still account for about a quarter of teen births, or nearly 1,700 births a week, a report by the US Centers for Disease Control and Prevention (CDC) has revealed.

Younger moms are "of particular concern" as they are not yet legally recognised as adults. They are at greatest risk for poor medical, social, and economic outcomes, Xinhua quoted the report published in the CDC journal Morbidity and Mortality Weekly Report as stating Tuesday.

"Although we have made significant progress reducing teen pregnancy, far too many teens are still having babies," CDC Director Tom Frieden said in a statement.

The majority of younger female teens are not yet sexually active, as 73 percent in this age group reported they had not had sex yet, the report said.

Parents are a particularly strong influence on the sexual behaviour of teens, however, nearly a quarter of females in this age group never spoke with their parents or guardians about sex, it said.

In addition, among sexually experienced female teens, over 80 percent had not received any formal sex education before they had sex for the first time. Over 90 percent of teens used some form of contraception the last time they had sex, but most of them relied on methods that are among the least effective.

The CDC said becoming a teen mom affects whether the mother finishes high school, goes to college, and the type of job she will get, stressing that more can be done to prevent pregnancies in younger teens.

Early Signs of Pregnancy
Pregnant or not pregnant? Catch on to the early pregnancy signs and symptoms and replace suspense .....