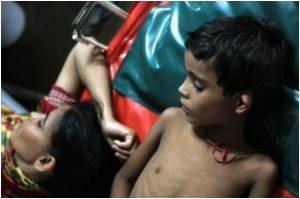 Doctors made a visit to the diarrhoea-affected area in Orissa.

Kashipur, Kalyansinghpur and Bissamkatak blocks of the district are the worst affected, as they have seen a spurt in diarrhoea deaths last week, after heavy rains in the region.

Amoebic dysentery or amoebiasis is an infection of the intestine that causes diarrhoea most frequently along with other causes.
Advertisement

The epidemic has so far claimed 10 lives in a span of a fortnight in the region, creating panic amongst the locals.


Villagers said ill persons have been sent to the Public Health Centre in the region.

"In our village, many people are affected by diarrhoea and we are sending the serious patients to the district hospitals, and others to the local public health centre (PHC). One person died due to this," said Arnapurna, a villager.

The Contingent Duty Medical Officer (CDMO) of Rayagad region, Venudhar Nayak, said they have taken the essential steps, and soon the diarrhoea outbreak would be under control.

"We have taken adequate steps. Ten doctors from a medical college have reached and 10 health workers and supervisors have also reached. We have sent them in 10 different affected sub-centres," said Nayak.

"There we are making makeshift treatment centres, for 24 hours treatment of the affected persons, and we have streamlined the... in use around the villages to take care of these persons around 24 hours treatments, and the situation is under control, and I expect with the steps that we are taking we will be able to control it," he added.

A medical specialist is a recognized expert in his field and is usually accredited by a medical board. Read ...
This site uses cookies to deliver our services.By using our site, you acknowledge that you have read and understand our Cookie Policy, Privacy Policy, and our Terms of Use  Ok, Got it. Close
×