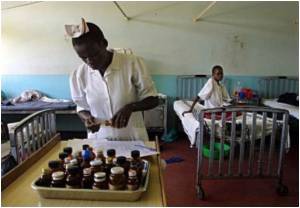 Steady progress is made in the development of new vaccines against tuberculosis (TB), researchers showed at a symposium in Spain. Several vaccine candidates are now being or soon will be tested in people.

European scientists gathered at the international symposium "Research and development of new tuberculosis vaccines" in Zaragoza, Spain, to share and discuss the progress in vaccines against the airborne infectious disease. At the second and last day (4 June 2010), Professor Stefan Kaufmann of the Max-Planck-Institute for Infection Biology in Berlin, Germany, illustrated that TB infection is a vicious circle: Each day about 125,000 infections result in roughly 25,000 TB cases, or 10 million new cases of TB disease a year. Around 5,000 people die of tuberculosis every day. Drug resistant TB strains, and HIV/TB co-infection further challenge global TB control.
Advertisement

Kaufmann emphasized that vaccines can play an important role in turning the tide. He referred to studies showing that a 40-50 percent reduction in TB could be achieved by new vaccines. Improved drugs could lead to 10-27 percent reduction and better diagnostics to a 13-42 percent drop.


He elaborated on the development of the VPM1002 vaccine candidate by his team. VPM has successfully completed tests on safety and immunogenicity in Germany. Further trials (phase Ib) are taking place in South Africa at the moment.
Advertisement
Also in Spain progress is made. "It is a difficult process from research to development," Professor Carlos Martin of the University of Zaragoza said, describing the development of the MTBVAC01 vaccine candidate discovered by him and his colleagues. After more than 10 years of discovery and proof of concept and now 4 years of development, the vaccine is taking its first steps out of the lab: The vaccine is scheduled to be tested in people (phase I safety trials) the end of next year.

Dr.Jelle Thole, director of TuBerculosis Vaccine Initiative (TBVI), in a meeting with Spanish journalists called MTBVAC01 a leading vaccine in its kind. "It is the only candidate derived from the actual bug that starts tuberculosis. All other vaccine candidates either are based on improving or boosting BCG," he explained. TBVI, a European research consortium for the development of new TB vaccines, aims to have 8 vaccines in phase II safety and efficacy trials in 10 years.

New vaccines are aimed to improve or replace BCG, the only currently available vaccine against tuberculosis, which "does not protect against the most prevalent form of the disease, and therefore has little - if any - impact on the epidemiology of TB," Kaufmann said.

However, Martin stressed that BCG, developed in the 1920s, is "still in use because it is protective in children. In this regard, new vaccines should be at least as good as BCG in protecting against severe diseases as meningitis and miliar tuberculosis, and better in protecting against respiratory forms of the disease."

Worldwide new tools against tuberculosis are in several stages of development. Jan Gheuens, a senior program officer on the tuberculosis team at the Bill & Melinda Gates Foundation, summarized at the symposium: "Two vaccines are in large clinical trials, lots of vaccines are in other phases. Furthermore, 8 drugs are in pre-clinical development or further. And there is much excitement on the performance of a TB molecular diagnostic test."

Gheuens briefly mentioned strategic challenges to be considered. "What will be the next generation of new vaccines? New antigens or a new approach to vaccines? What about the cost of progress, can we raise the funds for larger clinical studies?" he questioned, adding that fundraising is 'tough' and that not just greater awareness of the challenges in TB, but also (public/political) commitment is needed.

The two day symposium (3-4 June 2010) was organized by the University of Zaragoza, the foundation Ramon Areces and TuBerculosis Vaccine Initiative (TBVI).

Study Says Immune Evasion Uncommon in M. Tuberculosis
Scientists at NYU Langone Medical Center have found that "immune evasion", which is common to many ....