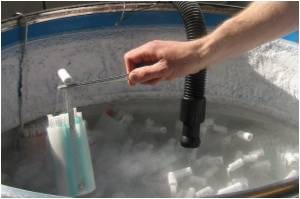 According to health think-tank 2020health.org, which campaigns against NHS waste, one in three hospitals with fertility services provide dirty magazines, with some also offering blue movies.


Two hospitals confessed they bought them directly from publishers, while others said the magazines were donated by staff, patients and visitors, with one hospital saying the material was given by a top consultant.

"We know of no government authorisation that sanctioned this," the Sun quoted the think-tank's director, Julia Manning, as saying.

The immorality was slammed as an offence to the three-quarters of NHS staff who are women, with many fearing for their jobs.

"Seventy-seven percent of the NHS workforce is female and they should never have to work in an environment that endorses pornography," she added.

It had earlier been revealed that Liverpool Women's NHS Foundation Trust splashed out 7,500 pounds on computers, flat-screen TVs, a DVD unit and blue movies for hospital sperm donors.

Source: ANI
<< Greenhouse Emissions by Gassy Cows Reduced by Bizarre Feed ...
It is Possible to Overcome Severe Addictions, Though Not Qu... >>

News Archive
News Resource
News Category
Why are Colds and Flu More Prevalent in Winter? Winter Weather Affects Blood Donations: Here's How Couples, Beware! 8 Expectations That can Break Your Relationship Bad Posture While Using Mobile Phones can Cause Back and Neck Pain Co-workers: As Role Models for Healthy Eating and Lifestyle Habits
More News
Sign up for Wellness Consult a Doctor Sign up for Selfcare