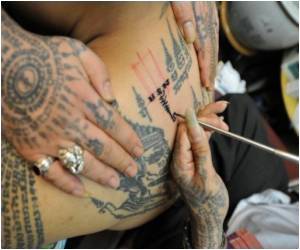 A study suggests that if you end up with a rash on a new tattoo, don't brush it off as an allergic reaction or a normal part of the healing process.

A recent study documents many cases in the Rochester, New York area, of tattoos infected with a type of bacteria often found in tap water. Evidence points to a pre-mixed grey ink, the type used in currently popular portrait or photography tattoos, as the culprit.

Laser Surgery Technique Removes Not Only Tattoos but Restores Art too

A laser technique is finding a second life in preserving great sculptures, paintings and other works of art though best known for its use to remove unwanted tattoos from the skin.
Advertisement

Mary Gail Mercurio, dermatologist at the University of Rochester Medical Centre, examined the individuals infected. She says some people with tattoos have allergies or experience other dermatologic complications, but it's not common.


"Patients and doctors need to have a certain level of suspicion when they see a rash developing in a tattoo. Many of the patients I saw thought their skin was just irritated and the issue would go away during the healing process," Mercurio was quoted as saying by The New England Journal of Medicine.

Beware of amateur tattoos as they carry a risk of hepatitis C.
Advertisement
"In actuality, they had an infection that needed to be treated with an antibiotic; it wasn't going to go away easily on its own," added Mercurio, according to a Rochester statement.

The investigation of the outbreak, which was also highlighted in the US Centres for Disease Control and Prevention's Morbidity and Mortality Weekly Report, started with a previously healthy 20-year-old man who had a history of multiple tattoos in the past without any issues.

In October 2011, he received a new tattoo on his arm and subsequently developed a persistent, inflamed rash in that area.

After learning of his case, the Monroe County Department of Public Health explored the issue and identified other individuals who developed similar rashes after getting tattoos at the same parlour, from the same artist.

Tests conducted at the Rochester Medical Centre revealed that a specific type of bacteria, Mycobacterium chelonae, was in the patients' skin and led to the red, itchy bumps in their tattoos.