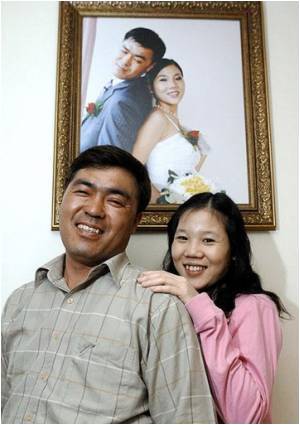 After the tragedy of a Vietnamese immigrant's murder by her husband, South Korea has decided to set up a task force to regulate international matchmaking business, officials said on Friday.

The task force will be manned by officials from the ministries of justice, gender equality, culture and foreign affairs, the prime minister's office said.

According to a study various types of violence between couples generally stem from a calculated decision-making process.
Advertisement

It will discuss measures ranging from changing how international marriage brokerage businesses are run to helping foreign spouses settle in Korea.


Thach Thi Hoang Ngoc, 20, was beaten and stabbed to death by her 47-year-old husband on July 8, eight days after she arrived in the southern port city of Busan.

Domestically Violent Males Think It to be a Common Occurrence

Men who engaged in domestic violence consistently overestimated how common such behavior is, and the more they overestimated it the more they engaged in abusing their partner,
Advertisement
The man told police he had heard a "ghost's voice" urging him to kill the bride when they quarrelled. He had been treated 57 times for schizophrenia since July 2005, police said.

More than a third of South Korean fishermen and farmers who married last year chose immigrant brides, some because they were unable to find local women happy to lead a rural lifestyle.

Official figures show foreigners -- mostly from China or Southeast Asia -- were brides in 1,987 marriages to farmers and fishermen in 2009, 35 percent of the total.

Also on Friday, a court in Busan sentenced three brokers to up to one year in prison on charges of illegally arranging marriages between Koreans and Vietnamese women.

Activists say some foreign brides, coaxed by false promises or deceptive advertising, end up living with spouses who have few assets or who are ill, alcoholic or just difficult.

The Independent has learnt that British citizens who have been forced into marriages overseas are being asked to cover the costs of their repatriation to the UK.
Advertisement
Advertisement