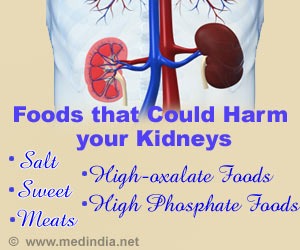 High-salt intake can promote kidney function decline in patients with chronic kidney disease (CKD), according to a study by Chinese researchers. They revealed that the effects of salt consumption on the kidneys are mediated at least in part by brain-kidney interactions. The findings suggest new strategies for protecting the kidney health of patients.

While it's known that salt intake can contribute to the progression of CKD, the mechanisms involved are unclear. The research team studied the brain-kidney connections in rats with kidney disease. They found that salt intake accelerated kidney scarring in the mice by activating a brain-kidney connection called the renin-angiotensin axis that interlinks the damaged kidney and brain by afferent and efferent sympathetic nerves, and targeting these nerves reduced salt-induced kidney scarring.

At least one in four Americans who are older than 60 are affected by chronic kidney disease and it is known to shorten lifespan significantly.
Advertisement

Researchers Dr. Fan Fan Hou said, "These findings provide novel targets to fill a therapeutic void in preventing relentless progression of chronic kidney disease." They noted that kidney scarring, or fibrosis, is the final common pathway for most categories of CKDs and culminates in kidney failure.


The study will be published in the 'Journal of the American Society of Nephrology' (JASN).

Chronic Kidney Disease may be Explained by Epigenetic Changes