Targeting CPR Education Could Save More Lives in High-risk Neighborhoods 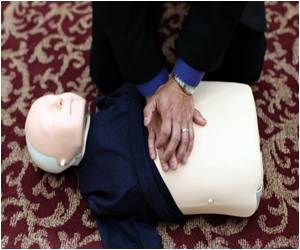 Targeting CPR education in high-risk neighborhoods could increase the number of bystanders giving CPR and decrease deaths from cardiac arrest.

This is according to a new American Heart Association scientific statement published in its journal Circulation.Survival rates for out-of-hospital cardiac arrest vary widely in the United States, from 0.2 percent in Detroit, Mich., to 16 percent in Seattle, Wash. The variance is due in part to whether a bystander does CPR. For every 30 bystanders who do, one life is saved, researchers said.

Yet according to the American Heart Association, bystanders provide CPR only 40 percent of the time  and rates vary widely by location.The new statement calls for communities to determine which neighborhoods have a high incidence of out-of-hospital cardiac arrests and low rates of bystander CPR by using geographic information systems that map the latitude and longitude of each cardiac arrest. Then, they should focus public education efforts in the high-risk neighborhoods."We have always had a one-size-fits-all approach, blanketing a whole area with CPR training, and we assume that will get to everyone," said Comilla Sasson, M.D., M.S., the statement's lead author and assistant professor in the Department of Emergency Medicine at the University of Colorado Anschutz Medical Campus in Denver."We are now saying that we need to shift our thinking to target CPR training to the areas where it is most needed."


"You have to have that kind of data to understand there are going to be specific areas that need to be targeted to increase awareness of cardiac arrest symptoms and how to do bystander CPR," Sasson said.Such data can engage community members  motivating them to learn hands-only CPR, she said. Better geographic data can also help researchers learn more about why most bystanders don't perform CPR or call 9-1-1. Some people, unaware of laws that protect them, worry they will be sued if they do CPR wrong and cause harm."Most people don't know what a Good Samaritan law is," Sasson said.
Advertisement
Others fear they or household members will have to show immigration papers before they can get help. And barriers to CPR training can be as simple as when and where the training is held, Sasson said.Furthermore, charting addresses of everyone who receives CPR training can provide useful information, she said. "Are we hitting the same people who have always been trained and not really impacting these higher-risk neighborhoods?"Predominantly African-American or Hispanic neighborhoods have higher rates of out-of-hospital cardiac arrest but lower rates of bystander CPR compared with whites, research shows.

Bystander CPR is also less likely to happen in low-income neighborhoods, independent of race, Sasson said.The statement also recommends a standardized dispatcher-assisted telephone program for 9-1-1 operators to provide CPR instructions to willing bystanders. The survival rate from cardiac arrest  9.5 percent  has been roughly the same for three decades. To increase it, new strategies to promote CPR are needed, Sasson said. "If we keep training the same people, we're not going to make a difference."

Source: Eurekalert
Advertisement
<< A New and Much Needed Test for River Blindness Infection Fo...
Researchers Give a Voice to Kids With Down Syndrome >>

Risk of Cardiac Arrest Determined by Where You Live
According to a recent study, your chances of having a sudden cardiac arrest can depend on where you ...

Decrease in Cardiac Arrests Thanks To Implantable Defibrillators
According to research, implantable cardioverter defibrillators account for one-third of the ......