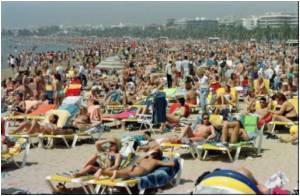 The introduction of the 'tan tax' has people up in arms against what they perceive to be discrimination and reverse racism.

The complaints emerged after it was said that a 10 percent surcharge on the use of ultraviolet tanning beds was likely to be included in the new health-care overhaul bill.

Dermatologists and skin cancer researchers have warned against too much exposure to sun and urged appropriate steps to protect themselves.
Advertisement

The case can seem deceptively simple- since patrons of tanning salons are almost exclusively white, the tax will be almost entirely paid by white people and, therefore, violates their constitutional right to equal protection under the law.


But the argument does not have any merit according to Randall Kennedy, a professor at Harvard Law School specializing in racial conflict and law.

Two experts from the University of Ulster have been given funding by the European Union to assess the presence of any link between sunscreen use and Alzheimer's disease.
Advertisement
"There is no constitutional problem at all, because a plaintiff would have to show that the government intended to disadvantage a particular group, not simply that the group is disadvantaged in effect," the Washington Post quoted him as saying.

Kennedy said that this is why courts have upheld a raft of other laws that also happen to have a disproportionate impact on particular groups.

There would have to be some record of direct or indirect comments by the officials involved, said Kennedy.

Or there would have to be no possible alternate reason for adopting the tan tax, he added.

But the levy's supporters argued from the start that it had a dual purpose- to raise funds to cover some of the cost of extending health coverage to the uninsured and to discourage a habit that scientific studies have linked with increased risk of cancer.

"To say that this health rationale was a mere pretext for wanting to stick it to white people is completely implausible," added Kennedy.